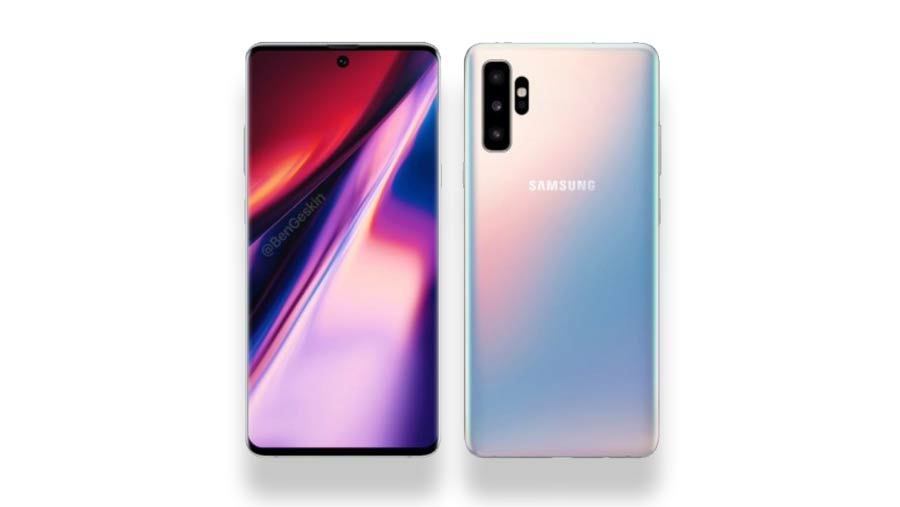 The Samsung Galaxy Note 10 is arriving on the 7th of August in multiple variants and a myriad of leaks have already given away to the design of the phablet. From the digital renders for the Galaxy Note 10 and the Galaxy Note 10+, we have learned that the two models will come with expansive displays with almost no bezels. While Samsung had steered away from the notch trend – at least for its flagships, it is opting for a hole-punch cutout for the front camera on the Note 10 series to minimize the bezels even further. Now, we have evidence of the Galaxy Note 10+ visiting the FCC along with images in the listing to confirm that these leaks about Samsung’s changed design philosophy are true.

Recent leaks of the official images by tipster Ishan Agarwal also reveal the slick gradient finishes that the Galaxy Note 10/10+ will come in. Besides, there have been several speculative rumors or leaks for the protective tempered glasses and covers/cases for the smartphone. Although these are not the first live images of the Galaxy Note 10+ that we’re getting to see – YouTube Mr_TechTalkTV allegedly shared hands-on images of the phablet, the FCC listing definitely makes the case more reliable and trustworthy.

From the images, we can see the triple camera array along with an offset camera, probably a depth sensor, on the back of the Galaxy Note 10+. This corresponds to both – the digital renders divulged by @OnLeaks last month as well as the images shared by Ishan. There’s another sensor underneath the purported depth sensor but we’re not sure of its utility.

Evidently, Samsung is finally dropping the headphone jack from the Galaxy Note 10+ along with the infamousdedicated Bixby button. The power button and the volume rocker sit on the left of the smartphone and since there’s no physical fingerprint scanner, we expect an ultrasonic under-display fingerprint scanner, just like the Galaxy S10 series.

We can also very much see the hole-punch camera in the center – which was more-or-less confirmed by the official teaser for the Samsung Galaxy Unpacked event. The listing also shows an earpiece above this camera.

As typical to the Galaxy Note lineup, there’ll be an S-Pen, which charges wirelessly, just like the previous generations of the Note phablets. Furthermore, the dimensions proposed by OnLeaks (162.3 x 77.4 x 7.9mm) match the original dimensions of the smartphone as tested by the FCC. This adds to the credibility and reliability of the leaker.

In terms of connectivity, the Galaxy Note 10+ supports dual-band Wi-Fi, including support for Wi-Fi 6 aka 802.11ax alongside the previous 802.11a/g/b/n/ac standards. It comes with Bluetooth 5.0 as well as LTE but there’s no 5G on this model yet. There’s another variant which is listed on FCC but we’re still waiting for the details to populate so that we know better if it is the Note 10 or the 5G variant of the phablet.

Instant camera translation in Google Translate is getting a lot better