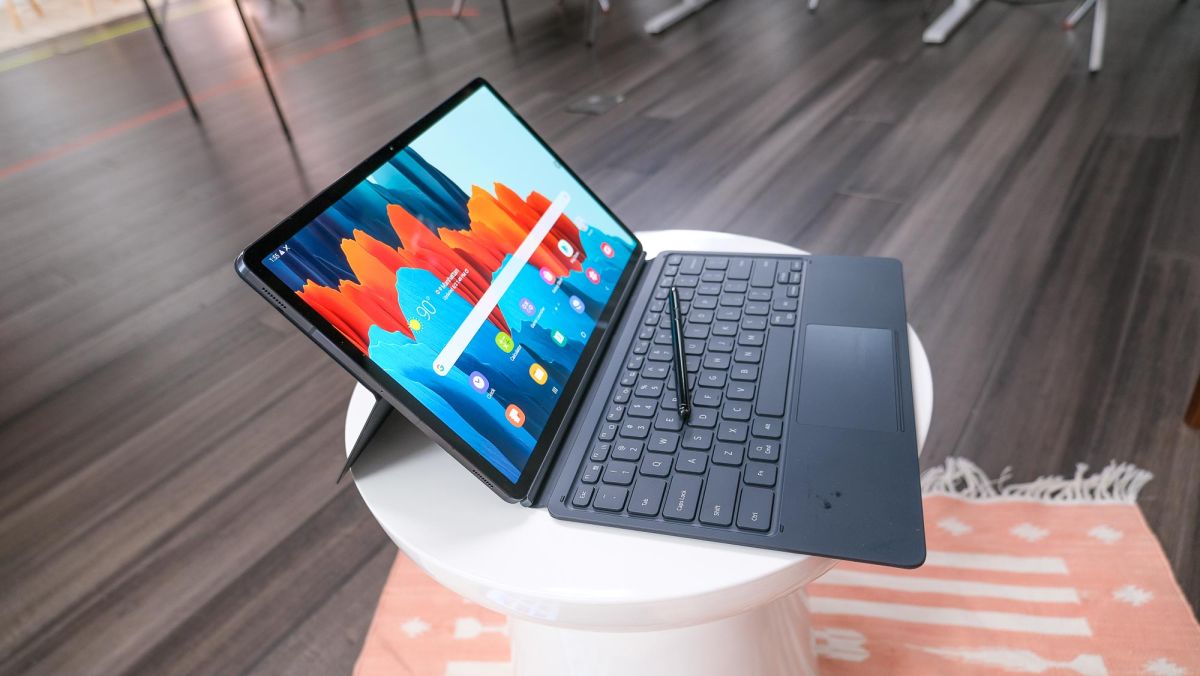 Samsung just unveiled the Galaxy Tab S7 and Galaxy Tab S7 Plus and we got to go hands-on with the more premium version of these flagship Android tablets. Priced at $849, the 12.4-inch Tab S7 Plus isn’t hiding its intentions of going toe-to-toe with the iPad Pro, the current best tablet on the market.

New to the Galaxy Tab S7 Plus are updated internals, 5G connectivity and a brand new S Pen included in the box. Samsung also revamped the external keyboard (sold separately) and outfitted the tablet with a 120Hz display. All of these changes make the Galaxy Tab S7 Plus feel like a significant upgrade from the Tab S6, which was already the best Android tablet by some distance.

We’ll publish a full review of the Galaxy Tab S7 Plus when we get closer to its fall release date. Until then, here is what we think about the new Android tablet so far. SAMSUNG GALAXY TAB S7 PLUS SPECS

There will be another configuration with 8GB of RAM and a 256GB SSD but Samsung has not provided pricing yet.

Samsung says the Galaxy Tab S7 Plus will be available in the fall. We will update this article when we get specifics.

The only change Samsung appears to have made to the front of the Galaxy Tab S7 Plus is moving the selfie cam to the longer edge of the tablet so you can use the camera in landscape mode when it’s connected to the keyboard. It’s kind of strange though because the in-display fingerprint sensor (more on this later) appears above the shorter edge of the tablet, suggesting it should be used in portrait mode.

When I flipped the Galaxy Tab S7 Plus around, the first thing I noticed was the stealthy Mystic Black color, which has a discreet yet sleek look. As much as I like the dark tone, I’m bummed that Samsung shifted from vibrant colors to more traditional shades. I’m interested to see if the Mystic Silver and Mystic Bronze color options add some excitement.

Also on the back is a glass teardrop-shaped magnetic stylus holder that extends from beneath a dual-camera module. This replaces the magnetic groove Samsung used on the Galaxy Tab S6 to house the stylus when it’s not in use. The magnet kept the stylus in place during everyday use but a gentle knock could dislodge the pen from its flat holder. If you’re worried about losing the pen, you might want to get the detachable keyboard (see below).

Otherwise, there are some antenna bands on the back of the tablet and the edges have an attractive brushed finish to them. A single USB 3.2 Type-C charging port resides on the bottom of the Galaxy Tab S7 Plus but there is sadly no headphone jack.

It wasn’t just the photos and videos I watched that looked great, but the panel is so saturated with colors that my eyes were drawn to everyone on the screen, whether it was a webpage or app icons. I’ve come across only a few displays with the same brilliant colors, typically on laptops, but there is something special about holding this one in your hand.

The panel is also very sharp, so you’ll see even the smallest details in videos and photos. It also has a 120Hz refresh rate, which means animations look and feel buttery smooth. Another spec worth noting is the 16:10 aspect ratio; the screen is slightly taller than a traditional laptop or tablet screen but still wider and narrower than the 4:3 ratio on the iPad. It’s a matter of preference as I learned when my wife and I went back and forth about the pros and cons of more rectangular vs. more square. Advertisement

Embedded in the display is a fingerprint sensor for logging in. It’s pretty quick but not as reliable as I would have liked. Samsung can still improve things between now and when the tablet is released so I’ll reserve my final judgment on the feature.

Samsung revamped the S Pen by making it more responsive and accurate so that artists can feel instant feedback as they drag it across the Tab S7 Plus’s touchscreen panel. A favorite feature for Galaxy Note loyalists, the new S Pen reduces latency from 42 milliseconds to 9ms. The updated stylus is also a bit thicker, which makes it more comfortable to hold, although I still find it too thin for my chubby fingers. Advertisement

The stylus definitely kept up with my fast swipes and rapid taps but I’ll need to do more testing before I compare it to others. Regardless of how good or bad it is, Samsung earns praise for including the S Pen in the first place whereas most of its competitors charge you extra for it. I also like how the S Pen charges when placed on the magnetic strip on the back of the tablet.

When you want to use the Galaxy Tab S7 Plus as a laptop, you can connect it to the optional keyboard attachment. Also updated this year, the new Book Cover keyboard now has a larger touchpad that supports multi-touch gestures, a delete key, function keys and full-sized Enter and Shift keys. The keys are surprisingly comfortable to type on and the trackpad works well, just don’t expect very deep key travel. Advertisement

Separate from the keyboard attachment is a leatherette folio cover that protects the back of the Galaxy Tab S7 Plus. It feels great and has a clever flap on the top under which the stylus is completely encased.

On the subject of being a laptop replacement, DeX will return to the Galaxy Tab S7 and Tab S7 Plus after a hiatus on the Tab S6 Lite. For the uninitiated, DeX is Samsung’s custom desktop interface that makes the Tab S7 Plus feel more like a laptop and gives you more multitasking options.

We didn’t run any of our benchmark tests on the Tab S7 Plus but the tablet never slowed down during my hands-on time with it. The Tab S7 Plus ran multiple apps at once and seamlessly switched between DeX mode and the standard Android 10 interface.

There was some speculation that the Tab S7 Plus would be a 5G version of the Tab S7 and that the cheaper model would be limited to Wi-Fi only or 4G LTE. Instead, Samsung is sharing 5G with all of its new flagship products.Advertisement

The Galaxy Tab S7 Plus supports a 5G connection, so you should get the fastest cellular speeds around if you’re in a 5G-covered area. As of now, 5G is pretty limited and only a few wireless carriers have a live network. We tested Verizon’s 5G network with the Lenovo Flex 5G and got speeds of up to 1.2 gigabits.

The Tab S7 Plus’ quad-speaker setup delvers our rich, loud audio. My wife and I watched an episode of Project Runway on the Galaxy Tab S Plus and only needed to listen at around 60% volume. And when I streamed music on YouTube Play, my favorite tunes sounded surprisingly full.

As for the cameras, the Galaxy Tab S7 and Galaxy Tab S7 Plus have a 13MP main camera and a 5MP secondary ultra-wide lens. On the front is an 8MP selfie camera. I took a few quick shots around my house and outside on my porch and, in general, the photos were sharp and colorful.

Last but not least, the Galaxy Tab S7 has an 8,000mAh battery while the larger Galaxy Tab S7 Plus has a 10,090 mAH cell. We’ll need to put these slates through our own battery test before we can give any definitive runtimes. For comparison, the Galaxy Tab S6 lasted for just short of 9 hours on a charge.

The Galaxy Tab S7 Plus feels like a marked improvement over the Galaxy Tab S6. Not only does it come with 5G connectivity but you get a faster processor, an upgraded S Pen included in the box and a much-improved keyboard that can be purchased separately. And don’t forget about the 12.4-inch display; it’s easily the best panel I’ve ever seen on a tablet and ranks up there with the best laptop screens.Advertisement

I have no doubts that the Galaxy Tab S7 will be great for consuming content, but what about productivity? DeX, combined with the S Pen and Book Cover gives you everything you need for day-to-day tasks, like browsing the web, checking your email, jotting down notes or writing reports in Google Docs.

But then we get to the price: $849 for the base model. This puts Samsung’s flagship Android tablet in iPad Pro territory. Is the Galaxy Tab S7 Plus worth the upgrade? Can it compete with Apple’s flagship tablet? So far, my impressions of the tablet are mostly positive. Now we just need to wait for this fall so we can do a full review of the Galaxy Tab S7 Plus and put it face-to-face with the iPad Pro.