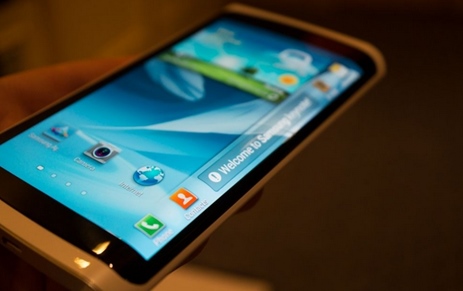 AS part of efforts to transform dreams of the future into reality, Samsung has launched another premium Smartphone, Galaxy S6 edge and S6 duos that improve flexibility with integrated design for simplicity in the Nigerian market.

The Smartphone, designed with incredibly intelligent cameras, craftsmanship and performance, comes with carved metal, which presents an opportunity for customers to own the future and has also redefined the company’s signature in Galaxy series.

The Dynamic Reflective Surface makes the phone glow in different colours when viewed from different angles. Speaking at the official launch in Lagos at the weekend, Managing Director of Samsung Electronics West Africa, Brovo Kim said, the innovation of Galaxy S6 edge and S6 duos portrays a refined experience for users with the latest technology to gratify their expectation.

“Samsung is committed to improving the quality of its products by fulfilling its brand promise of inspiring the world and creating the future by bringing new and outstanding innovations to the doorstep of consumers”, he said.

Relating the archaic model of telephony to the modern Smartphone of the twenty first century, Director of Information Technology and Mobile Samsung Electronics West Africa, Emmanouil Revmatas said, the phone technology has improved from the first Telephone conversation between Alexander Graham Bell and Mr. Watson in 1940.

“In 1994, Samsung churned out its first Mobile phone which recorded high sales in the phone industry giving an edge as the largest manufacturer of mobile phones thus largest phone market in the world, he said.

Other features of the S6 Edge include the ability to ascribe a colour to a contact which comes up when the contact calls and also send an automatic SMS to the contact. in case you cannot pick his/her call.

The information stream feature allows users choose from a selection of feeds that will steadily scroll along the edge display. From RSS feeds, to stock reports, sports scores, weather, Facebook and Twitter updates and notifications. Both devices support built-in wireless charger where you can charge your device wirelessly using a wireless charging pad.

It’s an impressive set of charging feature that supports the non-removable battery capacities. With the super-fast charging feature, the device can run for four hours on just ten minutes of charging, and charges to full battery in about 85 minutes.

The home button also doubles as a fingerprint reader, users no longer need to swipe; just place your finger on the button and its recognized. The Samsung Galaxy S6 Edge looks sleek; to assess its performance in terms of functionality and reliability of its features it has to be used over a period of time.