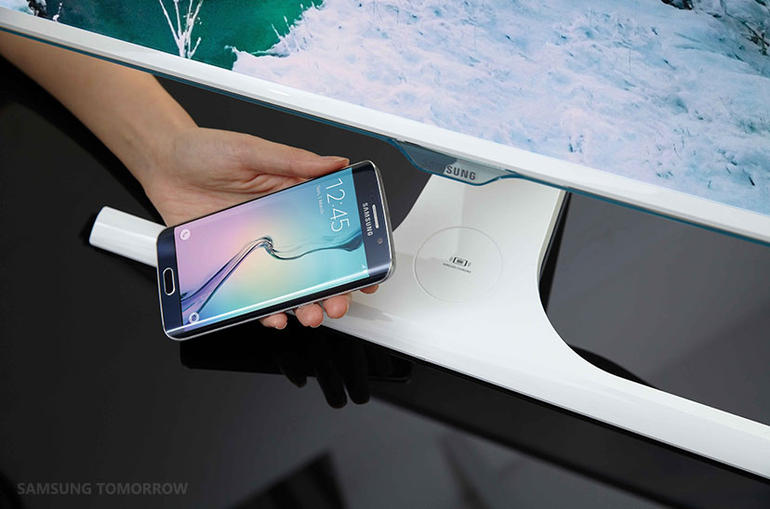 Here’s an interesting sales pitch: Buy the Samsung SE370 monitor and get rid of one more cable from your life.

On the surface that may not sound very enticing until you hear which cable the monitor banishes: The one that charges your mobile phone, tablet or smartwatch.

Samsung introduced the new SE370 computer display in two sizes on Monday — 23.5- and 27-inches — with both including a wireless charging port. The design is smart because the charging pad is built into the base of the monitor. When not using your mobile device, you simply place it on the monitor stand to recharge the battery.

Wireless charging of phones and the like has fallen short of expectations for a few reasons. We’ve witnessed a standards war over the past few years, for example, but lately there has been some industry consolidation.

Samsung chose to use the Qi standard for its wireless charging monitor and Qi has become fairly commonplace. Samsung phones use it as do devices from Nokia, Motorola, LG, HTC and others including Apple: The Apple Watch works with Qi charging pads.

Those pads themselves have been a bit of uptake hindrance as well: In order to wirelessly charge a device you need to buy the charging accessory.

By including it in a monitor, Samsung alleviates that potential pain point while adding an integrated convenience benefit.

From a visual standpoint, the new SE370 monitors sound good on paper: PLS display panels with 178-degree viewing angles and full HD resolution, 4ms response times and support for both Mac and Windows — including Windows 10 — computers.

Samsung hasn’t announced prices yet but I’d expect those details to follow in September at the IFA 2015 event in Berlin.