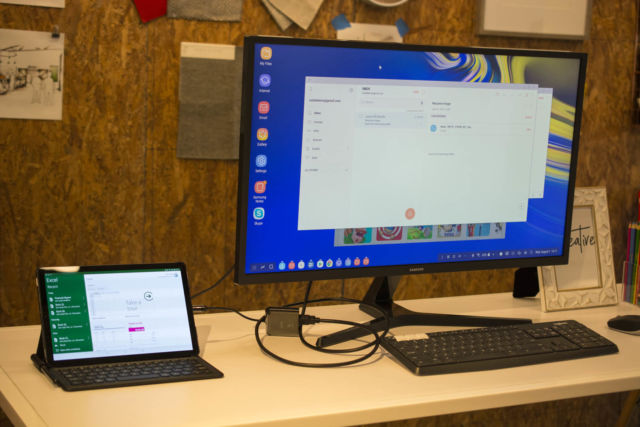 Today, Samsung is unveiling the successor to its well-rounded yet expensive Galaxy Tab S3 from last year. The new Galaxy Tab S4 improves upon last year’s slab in nearly every way, and it should be more versatile for users thanks to included Samsung Dex software. Confined to accessories until now, Samsung Dex software lets users connect a Samsung mobile device to a monitor and then use the device as a pseudo-desktop.

The first Dex dock came out over a year ago and was designed to be used with Samsung smartphones. Users could plug their device into the dock, connect it to a monitor, pair a keyboard and a mouse, and use the setup as they would a full desktop PC. The system ran a version of Android that Samsung modified to better suit a desktop UI, which included a lock screen and a task bar area with app icons. Dex on the Galaxy Tab S4 works just like this, with a couple of extra features that leverage the power of a tablet.

When connected to a monitor, both the big screen and the tablet’s screen can be used simultaneously. In a short demo, Samsung showed how the device supports up to 20 open windows at once and how features like split screen and drag-and-drop can be used just as they would on a desktop PC. Users can launch Dex when not connected to a monitor as well, and that produces the same modified Android UI on the tablet’s 10.5-inch, 2560×1600 Super AMOLED display.

Samsung claims users can launch any Android app while using Dex, but it’s unclear how many are truly Dex-optimized to fit a larger screen and make use of keyboard shortcuts. Big players, including Google, Adobe, and Microsoft, signed up to support Dex back when the software was still new, and more developers have been optimizing their Android apps for Chrome OS devices as Google’s browser-based operating system has gained popularity. Undoubtedly, more Android apps can be used comfortably on desktop-sized screens than when Dex originally launched.

In addition to Dex, the Tab S4 supports signature Samsung features like Air Command, translate, off-screen memos, and live message. Originally confined to Galaxy Note devices, live message lets users create gifs of themselves and decorate them with pen drawings before sending them in a message to friends and family. Samsung redesigned the S Pen that accompanies the Tab S4 to be easier to hold in your hand and more like a traditional pencil, but even with those changes it still doesn’t require charging. We’ll have to test it further to determine how much better it is than the previous stylus.

The Tab S4 is slightly bigger than the Tab S3 with its 10.5-inch display, and it runs on a Snapdragon 835 processor, 4GB of memory, and up to 64GB of internal storage with space for up to 400GB with the use of a microSD card. It has a 13MP rear camera and an 8MP front-facing camera while supporting 4K video recording at 30fps, and inside are four speakers tuned by AKG.

Samsung added a lot of heft to the Tab S4’s battery—the company claims the 7,300mAh battery can support up to 16 hours of video playback. On paper, it’s a solid improvement from the Tab S3’s 6,000mAh battery, so we’re interested in putting it through our battery tests to see if Samsung’s estimates hold up.

The Galaxy name is synonymous with Android, but the decision to make yet another Android tablet is a curious one. Android tablets are being left in the dust as Chrome OS infiltrates the tablet scene. It’s possible that Samsung will consider making a Chrome OS tablet in the future—but the Galaxy Tab S4 supports Android and Android only, unlike the company’s Galaxy Book of yesteryear that came in Android and Windows varieties.

The Galaxy Tab S4 will be available August 10 starting at $649 for the Wi-Fi version. Samsung will also sell an LTE version of the tablet through Verizon, but starting price for that model hasn’t been disclosed yet. The Book Cover Keyboard for the Tab S4 costs $149.

Like Loading...
Related Topics:featuredSAMSUNG’S TAB S4 IS BOTH AN ANDROID TABLET AND A DESKTOP COMPUTER
Up Next