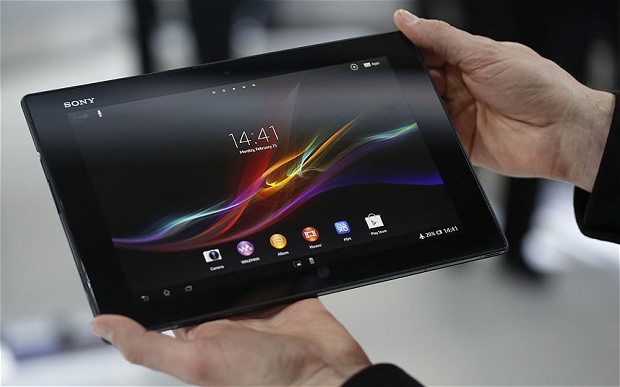 The world’s thinnest tablet is not at the cutting edge, says Matt Warman

Can a tablet ever be too thin? Sony’s Xperia Tablet Z is the companion device to its (xcellent) Xperia Z mobile phone, and both use a slimline design that is stylish, angular, waterproof and dustproof. The Tablet Z is a lightweight 495g and just 6.9mm thick, yet it gave me a great battery life of more than seven hours. It feels more futuristic even than the iPad simply because it is so implausibly thin and lasts so long.

And while I must confess I had no need or urge to test out its waterproof features, that addition is a useful thing to have too. It’s the tablet you could take into the bath if you really can’t put down that book or magazine.

Unfortunately, however, the Tablet Z doesn’t quite live up to its lovely styling and clever gimmicks – in part that’s because its corners make it slightly uncomfortable to hold for long periods, and also because its screen lacks the sharpness and brightness of its main Android rival, the Samsung-build Nexus 10. The 10” display boasts 224ppi, but with a resolution of 1920×1200 it doesn’t offer the quality of the iPad (admittedly 150g heavier) or the Nexus 10.

Sony has built in a remote control, but when I tried to programme it for my LG television it invited me simply to work my way, hit and miss, through the 70+ different standards LG has used across its ranges over the years. Universal remote manufacturers such as Logitech do this much better.

Sony’s own apps, such as Walkman, Album and Movies, add a little bit to the experience, but this is a tablet that needs better Android apps to really shine, and a better screen to display them on. Although I didn’t find the performance sluggish, the processor is a mere Snapdragon S4, which puts the device outside the top of the range.

MicroSD support is a great boon, the 8.1MP camera is fine – but this isn’t a tablet with a stand-out feature other than its lovely looks.

Apple Rumored to Go Black, White and Flat for iOS 7