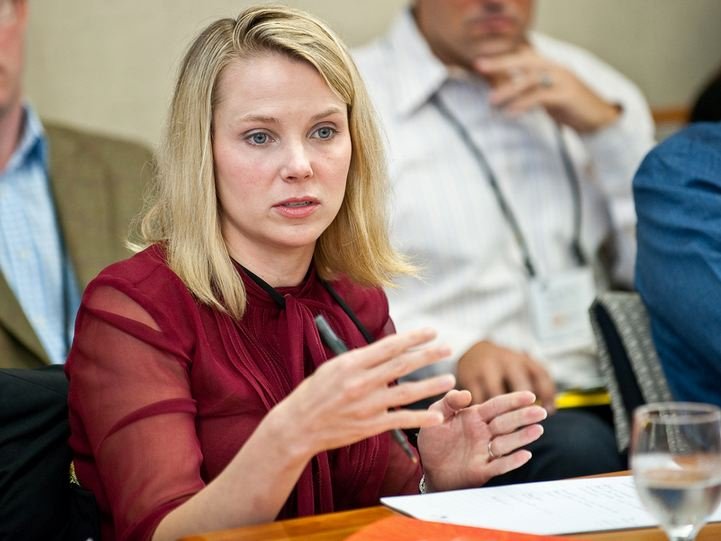 Mayer was born in Wausau, Wisconsin, the daughter of Margaret Mayer, an art teacher of Finnish descent,[13] and Michael Mayer, an engineer.[14][15] After graduating from Wausau West High School in 1993,[16] Mayer was selected by Wisconsin Governor Tommy Thompson as one of the state’s two delegates to attend the National Youth Science Camp in West Virginia.[17]

Mayer graduated with honors from Stanford University with a B.S. in symbolic systems and an M.S. in computer science. For both degrees, she specialized in artificial intelligence. In 2009, the Illinois Institute of Technology granted Mayer an honoris causa doctorate degree in recognition of her work in the field of search.[18][19]

Mayer joined Google in 1999 as employee number 20 and was the company’s first female engineer.[20][21] During her 13 years with the company, she was an engineer, designer, product manager and executive. Mayer held key roles in Google Search, Google Images, Google News, Google Maps, Google Books, Google Product Search, Google Toolbar, iGoogle and Gmail. She also oversaw the layout of Google’s well-known, unadorned search homepage.[22][23] In her final years with Google, she was Vice President of Local, Maps, and Location Services and, before that, vice president of search products and user experience.[24]

Prior to joining Google, Mayer had done internships at SRI International in Menlo Park, California and the UBS research lab Ubilab in Zurich, Switzerland.[25][26]

On July 16, 2012, Mayer was appointed President and CEO of Yahoo!, effective the following day. She is also a member of the company’s board of directors.[27][28] In February 2013, Mayer oversaw a major personnel policy change at Yahoo! which required that all remote-working employees convert to in-office roles.[29] Having worked from home toward the end of her pregnancy, Mayer returned to work after giving birth to a boy, and had a nursery built next to her office suite. Shortly thereafter, she was criticised for the telecommuting ban.[30]

In April 2013, Mayer changed Yahoo’s maternity leave policy, lengthening its time allowance and providing a cash bonus to parents.[31] CNN noted this was in line with other Silicon Valley companies such as Facebook and Mayer’s former employer Google. [32]

In July 2013 Yahoo reported a fall in revenues, but a rise in profits compared with the same period in the previous year. In her announcement Mayer chose to ignore the continued revenue slide, and instead hailed the company’s relentless release of new mobile offerings. Reaction on Wall Street was muted, with shares falling 1.7%.[35]

On the same day Yahoo! announced her hiring, Mayer revealed that she was pregnant.[44][45][46] Mayer gave birth to a baby boy on September 30, 2012.[47] Although she asked for suggestions via social media,[48] the name Macallister was eventually chosen for her baby’s name from an existing list.[49]

How iPhone 5S makes your finger into a password