The 20 Most Hacked Passwords in the World: Is Yours Here?
Advertisement 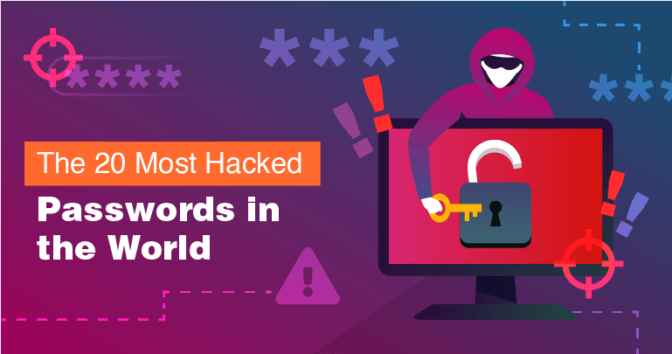 What about in Germany?

This report summarizes the findings of the SafetyDetectives research team who collected over 18 million passwords to find the 20 most used, most predictable, and ultimately most hacked passwords all over the world.

The data used in this report was gathered from several years’ worth of leaks found on hacking forums, marketplaces, and dark web sites — usually sold as treasure troves of sensitive information for criminals. (Note: We only analyzed the data — no identifying information like usernames or banking details were compromised while conducting this research.)

Our goal was not to simply put together another “most used/hacked passwords” list. Instead, we wanted to see if there were any obvious patterns occurring around the world which would cause hackers easier access to user information, regardless of language or location.

Non-English speaking countries are often underrepresented in cybersecurity research, but non-English speakers are still vulnerable to cyber crime. It’s important to stay protected on the internet no matter where you live or what language you speak. And it all starts with a password manager such as Dashlane and an antivirus – Norton, Malwarebytes & Bitdefender are some of our top recommendations.

Around 9 million passwords were from the general population:

The remaining 9 million passwords were country-specific:

We looked at this from a lot of different angles to identify the weakest and most insecure passwords in the world.

For each population, we identified:

We also looked at:

Note: Many of the passwords analyzed in this report would not be allowed to be used by sites that have password strength checks in place.

Top 30 Most Used Passwords in the World

Analyzing passwords by country, we notice a few more things:

The most common password pattern: German users show a preference for simple, easy-to-guess increasing numeric passwords, starting with “123” and going all the way to “1234567890”. Such passwords constitute nearly 50% of the German top 20 list.

Other password trends: The word “passwort” (“password”) and “hallo” (“hello”) are popular choices, and so are keyboard patterns using the German keyboard layout (e.g. “qwertz”).

The most common password pattern: While the French version of “qwerty” – “azerty” – is number one, common French words and phrases requiring little to no translation – like “marseille”, “bonjour”, “jetaime”, “soleil”, or “chocolat” – are also very popular.

Other password trends: Increasing numeric patterns are notably less popular with French users than with the worldwide population. Only 3 out of the top 20 French passwords are numeric. This can likely be explained due to French keyboards requiring users to press “Shift + number” instead of only the number.

The most common password pattern: All of the top 20 Russian passwords are numbers and patterns, and many of them are different from worldwide trends. Russian users often choose diagonal keyboard patterns involving numbers and alphanumeric characters – for example, “1qaz2wsx” or “1q2w3e4r”.

Other password trends: Russian users are the least likely of the populations we analyzed to use meaningful words – in Russian or English – as passwords.

The most common password pattern: The first names like “francesco”, “alessandro”, or “guiseppe” are the most popular password choices for Italian users. Such passwords are particularly insecure and easy to guess when used in combination with an email mentioning the same first name – for example, [first_name]@[email_provider].com. Unfortunately, this practice is still very common.

US – Top 20 Most Used Passwords

The most common password pattern: US users are equally likely to use an increasing numeric pattern, keyboard pattern, or a common word or phrase as a password.

Other password trends: 25% of the US’s top 20 passwords contain “qwerty” as an exact or partial match.

The most common password pattern: Spanish users show a preference for numeric patterns like German users do.

Other password trends: Out of the 5 common words in the top 20 list, 2 are the names of famous Spanish soccer teams (“barcelona” and “realmadrid”).

Students and faculty at university don’t typically regard their .edu email addresses as important, so they tend to create easy-to-guess passwords.

The 20 most common .edu passwords are:

Other password trends: .edu users often pick names of sports for their insecure passwords, and they are more likely to do so than any other category of users analyzed in this report. The increasing numeric passwords they use tend to be short – 6 out of the 8 numeric patterns on the list are under 8 characters long.

Analysis: The Most Used Word Patterns in Passwords

This section summarizes our analysis of commonly used word patterns within passwords. Numeric sequences (such as “123456” etc.) are excluded from this section’s analysis. (Note: We include numeric patterns in our analysis later on.)

The use of first names inside passwords is very common, especially first names that are included in email addresses — 4.19% of worldwide users do this. Italians (4.13%), Russians (3.79%), and Germans (2.51%) are the global populations most likely to use these extremely easy-to-hack passwords.

A “123” pattern added either before or after the email address’s first name was observed in about 0.03% of the worldwide population’s passwords. While adding random numeric patterns to passwords is a great strategy, this simple pattern is far too common, making these kinds of passwords very easy for hackers to guess.

In our analysis of 9.3 million users worldwide, we frequently found pop culture and historic figures used either as part of a password or an exact match.

Not surprisingly, we found that cultural references influenced password choices quite heavily.

The popular TV series “Friends” was another top choice with 4,289 mentions, while “Starwars” was used 2,237 times.

The popular sports figure “Ronaldo” was at the 10th spot with 1,265 mentions.

To put the findings of our report into perspective, we compared them with the top 10 list of the most used passwords that hackers and security researchers use when testing login security.

We used the following resources to create the Hacker’s Top 10 most used passwords list:

This comparison shows that, overall, the most insecure passwords to use across all countries and populations are “123456” and “12345678” – two of the most obvious, easiest-to-guess numeric patterns which meet the minimum 6 to 8 character password length requirement that most web sites have.

Here’s how the 10 most common passwords in various populations matched the Hacker’s Top 10 list:

The overall password trends analyzed from worldwide users match up pretty well with this list, making the most used passwords in the world extremely prone to dictionary attacks. Those users in the US and Spain with these passwords are also extremely susceptible to hacks.

With hacking rates on the rise in 2020, most people become victims because they don’t create passwords that are unique, hard to guess, and secure. And that makes sense. Without a password manager, it’s impossible to remember hundreds of unique, challenging passwords for every single login.

The best and easiest way to achieve all of these things is by using a password management system. A good password manager will create secure passwords for all of your accounts, autofill them when logging in, and have high levels of encryption so no one can steal your information. We recommend a low-cost premium password manager like Dashlane, but any of the best password managers on the market will guarantee your passwords are strong, secure, and protected.

Google improves malware protection for users most likely to be attacked