The Best Smartwatches of 2019
Advertisement 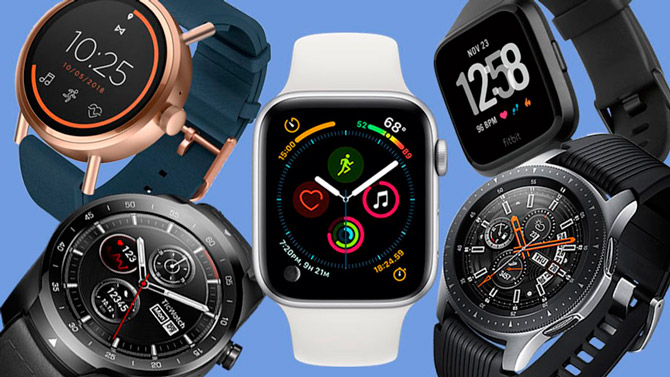 This definitive guide to the best smartwatches of 2019 explores everything you need to know before buying a smartwatch, including what to watch out for, as well as which is best for each type of person.

Introduction
What You Need to Know
Buying Guide

A smartwatch isn’t going to replace your smartphone. In fact, it’s more of a smartphone accessory these days. They have tiny screens and many of the apps you use every day — Instagram, Twitter, Facebook — don’t have smartwatch apps. Plus, most smartwatches don’t have LTE, meaning they can’t receive calls or texts when not tethered to your smartphone or connected to wi-fi. But smartwatches do have some advantages. They show you who’s calling, texting or emailing you without forcing you to look at your phone. They effectively replace your need for a dedicated fitness tracker. And some look pretty cool. Whatever your lifestyle and which smartphone you use, you’re bound to find something that suits you.

Not all smartwatches are the same, however. Most fall between a fitness tracker and something that relays smartphone notifications to your wrist. Some smartwatches can work untethered, completely autonomously from a smartphone — you can make calls, send texts and navigate directions, all while your smartphone is miles away. There are also hybrid smartwatches, made by mechanical watch manufacturers like Tag Heuer, Fossil and Withings, that have sensors to track fitness and traditional watch battery that lasts months.

Before pulling the trigger on an Apple Watch Series 5, or one of the new Android smartwatches made by Samsung or Huawei, do some research. Make sure it’s a smartwatch that’ll work to its full potential with your current smartphone and matches your budget and how you want to use it. If you work out a lot, get a fitness-focused smartwatch. If you go off the grid, get an LTE-connected one. Whatever your case, make sure you know the basics.

Before Buying, Here’s What to Know

Most smartwatches are available in LTE or cellular models, too. The main advantage of an LTE connected smartwatch is that it can work completely untethered from a smartphone. Since it has a built-in cellular radio, the smartwatch can place and receive phone calls and stream music independent of your phone. There are a few caveats, though. The battery life will likely be worse. The smartwatch will probably be bulky. And you’ll have to pay a monthly fee to add the smartwatch to your cellular plan. (Consult your cell carrier for exact info.) Plus, they just tend to be more expensive than regular “GPS only” models.

Compatibility. Not all smartwatches are compatible with all smartphones. For example, the Apple Watch only works with an iPhone, and all smartwatches running Android 2.0 will work with any Android, via the Android Wear app, but not all iOS features will carry over and some of the apps work wonky together, such as iMessage and every Android messaging app. Basically, if you own an iPhone, I recommend getting an Apple Watch; and if you have an Android smartphone, get one of the numerous Android 2.0 offerings.

Heart rate sensor. Knowing your heart rate is the most important fitness metric — experts agree. The data, taken both during and after your workout, will help you achieve certain fitness goals. If you’re serious about working out or just improving your cardiovascular health, you want a smartwatch with a heart rate sensor.

Built-in GPS. This is still a rare feature in smartwatches and wearables in general. For fitness, the built-in GPS is able to track speed, distance and location, all of which can help calculate calories burned and determine the overall success of a workout. It can also help give you more accurate weather reports and navigation instructions if your smartphone isn’t nearby (and it won’t kill a lot of data). It’s mainly a tool to gauge fitness, however; like heart-rate sensors, it’s mainly for people into fitness.

Battery life. The main complaint with smartwatches is battery life. There are very few on the market that can last longer than 24 hours, so manage expectations. Most of today’s high-end smartwatches have a bright LCD screen or AMOLED displays, which are beautiful but tend to kill the battery. Basically, expect to take it off at night to charge.

The overall look and lifestyle. At the end of the day, a smartwatch isn’t just another device — it’s part of your wardrobe. You’re not going to put it away when you want, like your smartphone, so you should like the way it looks. Also, smartwatches come in all sorts of elegant or rugged options. If you want a more stylish option to match your silk shirt and selvage denim jeans, go for the LG Watch Style. If you plan on taking it to the beach or hiking, get a rugged and water-resistant model, like the Garmin Forerunner 235.

The Good: The Series 5 is the best smartwatch that Apple has ever made and, per usual, it’s the best smartwatch for anybody with an iPhone. It’s the first Apple Watch to have an always-on display and it’s the first to be available in titanium (among other materials, such as aluminum, stainless steel and ceramic). It also has a brand-new compass sensor that allows it to give the wear a better directional sense just by looking down at the smartwatch (although the compass sensor only works with a few navigation and activity apps right now).

Watch Out For: The Series 5 isn’t actually that much of an improvement over the Series 4, which Apple has stopped selling. The two look almost identical and can basically do the same things. The difference, other than the standard next-generation upgrades (such as faster processor, new colors and materials), is that the Series 5 has a compass sensor, but it’s not a game-changer. Also, the Series 5 is still fairly expensive (especially if you want a ceramic or titanium model).

The Good: The Galaxy Watch Active 2 is arguably one of the prettiest smartwatches out there. It’s petite, round and has a beautiful and bright always-on OLED display. The big differentiator between it and its predecessor, the Galaxy Watch Active (which was released earlier in 2019), is that “version 2” has a touch-sensitive bezel making it much easier to use. It has a decent battery life and works with Spotify Offline (you can download playlists and listen to them without your smartphone nearby). It also has sleep-tracking features that Apple’s offerings lack. It works best with Samsung smartphones.

Watch Out For: If you own an iPhone, you should skip the Galaxy Watch Active 2 (even though it will technically still work with your iPhone) as it’s still dependent on many of Samsung’s proprietary apps. Its petite size might be a turnoff for guys (and girls) who like larger smartwatches. There’s no default navigation app and Bixby is the voice assistant that’s built into the smartwatch, which you probably won’t use.

The Good: The Galaxy Watch is essentially a larger, more robust version of the company’s Galaxy Watch Active and Galaxy Watch Active 2, which a lot of guys will like. It has a rotating bezel, unlike smaller “Active” smartwatches, that makes navigating the smartwatch’s OS super easy. Plus, its larger size allow it to have a significantly larger battery. The 46mm model has a week-long battery, while the 42mm model gets up to four days, which is still over twice as long as Samsung’s other smartwatches.

Watch Out For: The Galaxy Watch is slightly older and thus has slightly older and its accelerometer, heart rate monitor and GPS sensors aren’t able to track the same level of workout metrics. It also lacks an electrocardiogram (ECG), which is used to detect an irregular heartbeat.

The Good: If you own an iPhone, the Series 3 is the best entry-level smartwatch you can buy. It pairs seamlessly with your iPhone, showing you calls, emails and iMessages; and it’s an excellent fitness and ski tracker, too. It’s still available in an LTE model, meaning you can use apps, like Apple Maps or Apple Music, without having your iPhone nearby.

Watch Out For: The Series 3 doesn’t new, sexy look of the Series 5. It doesn’t have an always-on display. And it lacks the upgraded sensors and processing power of the Series 5, so it’s not quite as good of a health and fitness tracker. Apple Music is the only music app that allows you to listen to music offline.

The Good: Garmin’s Forerunner 945 offers most of the same fitness-focused features as the company’s even higher-end Fenix line of smartwatches. It lets you train for specific events, like a triathlon, where it can show your interval and transition times. It also works with most of the popular third-party products and apps, such as Final Surge and TrainingPeaks. Garmin partnered with Firstbeat, a company that specializes in physiology and heartbeat analytics, so the Forerunner 935 can give you deeper insights from your workout, such as your VO2 max and lactate threshold. Compared to its predecessor, the Forerunner 935, Garmin’s new running smartwatch has a significantly bigger battery, has enough built-in storage to hold 1,000 songs, and it supports full-color maps.

Watch Out For: It’s expensive. The smartwatch has a plastic construction, making it lightweight but also feels a little cheap. Won’t work as perfectly with your iPhone as an Apple Watch.

The Good: The Fitbit Versa 2 is a solid entry-level smartwatch for iPhone or Android users alike. It’s essentially an upgraded version of the original Versa, with a more simplified design, a better processor, a completely-new OLED display, and improved sleep tracking. It also works with Alexa, unlike the original Versa, so you can use your voice to do things like set alarms and control your other compatible smart home devices.

Watch Out For: The biggest downsides are that there’s no built-in GPS and there aren’t any LTE models — it still relies on having your smartphone nearby most of the time. With the lowered price of the Apple Watch Series 3, it’s actually pretty difficult to recommend the Versa 2 for people who have an iPhone. Also, there’s a lot of unknown surrounding Fitbit at the moment. Google recently acquired Fitbit and the next batch of Fitbit smartwatches will likely look very different and run Google’s Android Wear operating system.

Razer made another Switch-like mobile gamepad, but this one works with Android and iOS