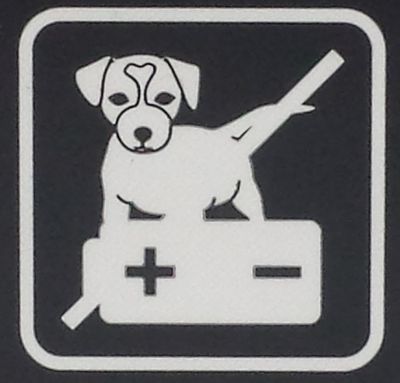 Not a chew toy

Now that the Samsung Galaxy S8 is starting to arrive in customers’ hands, we’re also starting to see tons of durability tests and teardown videos on YouTube. Some viewers might notice from a few videos that there is a peculiar icon on the Galaxy S8 battery that depicts a dog with a bar across it.

So what’s up with this anti-dog label? Let us explain.

Does Samsung hate dogs? What’s this sticker supposed to mean?

Quite the opposite, really! The S8 battery is not removable for general consumers, but if you were to disassemble the phone, Samsung wants you to know that the battery should not be left around as chew toys for pets as batteries are toxic to them.

An ingested battery can cause burns, irritation, loss of appetite, diarrhea, abdominal pain, and damage to the dog’s digestive tract. Woof.

Isn’t it also toxic to people? Why is Samsung warning users to keep batteries away from dogs and not kids?

Yes, battery ingestion is dangerous to both humans and pets. But lithium-ion batteries in particular have a high output, which means they can explode (as we’ve famously learned from the Note 7.) My colleague Angela Chen explains that “the higher the voltage is, the more likely the electrolytes are to combine in a way that makes them catch fire.”

If a dog were to chew and puncture the battery, it could cause the battery to swell and potentially burst into flames. A YouTube video from What’s Inside demonstrates what that swelling looks like, though it looks like the S8’s battery is able to protect itself from blowing up.

When did Samsung start putting these dog warning labels on batteries?

The S8 is not the first smartphone battery Samsung slapped its dog warning label on — from looking through its Galaxy smartphone line, the change appears to have taken place in 2014when the company launched the Galaxy S5 and the Galaxy Note 4. Previously, Samsung actually used a keep-away-from-baby label. It is unclear what prompted the change, or why Samsung removed the actual battery from the pictograph in later designs.

Is this standard across smartphone makers?

We looked through battery labels from a variety of popular smartphone makers — Apple, Motorola / Lenovo, Sony, Huawei, Oppo, Xiaomi, HTC, and OnePlus — and none appear to regularly feature a ‘not dog-proof’ icon. The one company that did use the label is LG, which began featuring the icon in 2013 with the LG G2. The icon appeared in Nexus phone batteries as well.

Samsung and LG use different battery suppliers, and over the years, the batteries have been assembled anywhere from China, Japan, and Korea. Last December, however, there were reports that Samsung may be looking to LG to help supply its smartphone batteries. Interestingly, LG Chem is also a battery supplier for Apple.

All this is to say, it doesn’t seem like this is a country-specific regulations-required label despite both companies being based in Korea. Samsung still uses the no-children sticker on its Galaxy Tab line, for example, even though the tablets also run on lithium battery.

What should I do if my dog accidentally ingests battery?

If you suspect that your dog has eaten a battery (lithium or otherwise,) seek veterinary attention immediately. Do not try to induce vomit as the battery liquid may have leaked and can damage your pet’s esophagus on the way back up.

Yeah… unless you know what you’re doing, it’s best you let professionals replace your smartphone’s battery when necessary. And keep away from flames and mouths of any animals with fangs.