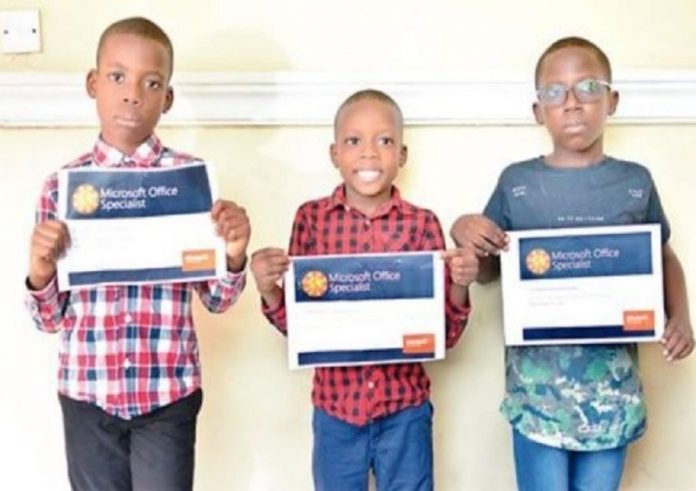 Damilare Akano, a 6-year-old Nigeran pupil has emerged as Africa’s youngest Microsoft specialist in the Certiport international certification. Akano’s emergence came after triumphing over 200 other students that participated in a month-long summer camp tagged: ‘Nextgen IT Experts’ organised by a Learning Systems Institute, New Horizons in Lagos recently.

Akano, however, came top in the Microsoft Office PowerPoint 2016 examinations with a score of 871 out of 1000 points. He was followed by a 10-year-old Masters Toluwalese Kwaku and eight-year-old Master Kolawole Akano, who scored 825 and 800 respectively.

Speaking on Akano’s emergence as winner as the youngest Microsoft specialist, the Managing Director of New Horizons, Tim Akano made known that the achievement of the 6-year-old did not come as a surprise but bears testimony to excellence which New Horizons is known.

What you should know: The programme provides industry-leading assessments of skills and knowledge through Microsoft’s new project-based testing, giving students and professionals real-world exercises to appraise their understanding of Microsoft Office. This guarantees that every certified user has demonstrated the ability to command the full features and functionality of Microsoft Office, preparing them for future academic or workforce opportunities.

More so, this feat gives students and workforce candidates the power to chart their own course, fulfill their ambition, and realise their potential.

Why this matter: Akano’s triumph, however, came in the heat of controversies surrounding Nigerians at the global stage. In recent times, Nigerians have been marked for one bad thing or the other in the social media space, which has been very costly for other individuals who are descent in their activities.

Akano’s news which has widely been celebrated is believed that it will play a key role in changing the recent perception about Nigerians.