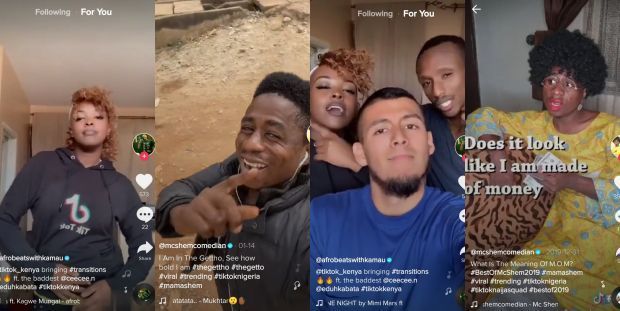 The Chinese company behind the world’s fastest-growing social media app had already been holding “creator sessions” and meetups around the city in 2019, urging creative young Kenyans to learn about the benefits of joining the “fun, cool short video platform”. Last October it partnered with Chinese phone maker Transsion’s Infinix brand in Kenya with a hashtag campaign called #WeAreHot to boost a new phone model but also raise awareness of the app.

TikTok has been investing quietly, but significantly, to usher in a new age of influencers in Africa. It’s part of a concerted strategy for the youth-friendly app to get a major foothold in the world’s youngest continent and home to some of the leading global pop culture movers across music and film especially with the recent rise of Afrobeats and Nollywood.

In Nigeria, TikTok  has been signing up comedians, dancers and singers from Instagram and YouTube with promises of higher visibility and more followers. By October, the company owned by Beijing-based ByteDance, hired a local “talent acquisition manager” tasked with “talent management, co-branding campaigns, and creative hashtags,” according to a LinkedIn post.

For South Africa, TikTok has a dedicated account @tiktok.southafrica with much of the usual youthful fare of the latest dance steps and quirky clips. In January, in a sure sign of the growing importance of TikTok to driving usage, phone company MTN inked a deal to create customized MTN TikTok internet data bundles. It was a similar strategy that saw WhatsApp usage rocket in South Africa.

When TikTok first looked at the African market in 2018, it had barely been searched by Africans on Google trends.  Today, hits for TikTok top searches for terms like “influencer” in the apps three key markets: Kenya, Nigeria and South Africa.

Facebook has worked tirelessly for the hearts and minds of African users going so far as to offer free data usage for its networks of apps in almost half of the countries in Africa. Over time WhatsApp has become the most popular platform across Africa.

But TikTok is taking a different approach by focusing on understanding the African market and encouraging users to express themselves in the way that they know best. It has been hiring local staff and developing creators in its three key markets (Kenya, Nigeria, and South Africa) since 2018, giving the app a competitive advantage in targeting popular creators and gaining a feel for the type of content its users like to see.

“Instead of serving up videos from only the popular, big-name users on the platform, the individualized feed highlights video content based on the types of videos users like,” TikTok says in a statement to Quartz Africa.

#Africancheck on TikTok has 3.8 million views. Using this hashtag with video footage, overlaid by ambient beats, young Africans create videos showing off exactly what they feel it means to be African.“Lots of spices’ flash over TikTok Kenyan creator Polly Wachirah’s screen as she pans over her cupboard.  “Kitengi” Tanzanian and Ugandan user quinlytfah0 shows off the classic East African fabric. The same hashtag on Instagram, has fewer than 100 posts a number of which are reposts from the TikTok app.

“If you want to think of Africa from a community  standpoint, it’s a very tight knit, very highly networked, therefore if people are able to see their friends, people they know, celebrities they know, [and] what they are doing, it becomes very powerful as a feature,” says Mike Otieno, co-founder of Wowzi Technologies, an influencer marketing platform in Nairobi, localized content is an important feature for African users.Quartz Daily Brief

TikTok’s ability to pull off hyper-localized hashtags that capture the spirit of African creators is largely due in part to  the app’s powerful algorithm that utilizes location data and user tastes to recommend content under a tab aptly named “for you”. For example, when a TikTok user in Kenya logs into the app, they are fed an array of videos from a mix of Kenyan creators and popular TikTok creators from around the world. This enables up and coming creators on the continent increased visibility and more followers.

Popular Nigerian TikTok creator @mcshemcomedian posted his first TikTok video in May 2019. He currently has 2.4 million followers on his TikTok account alone, more than his following on his Youtube and Instagram accounts combined.

Creating a video on TikTok involves three key steps: making a video, adding creative filters and editing tools, and using the right hashtag. Users post variations of the same video under the same hashtag challenge and the results vary dramatically.

Community support has  been crucial to getting African creators to transfer their skills and expertise to the app. Though says it does not pay creators, it does provide creators with “community management teams”, “offline support”, “creative filters” and “editing tools”.

For many young Africans these resources have been a major draw. On Instagram and Facebook, creators can be limited in the content they produce without third party tools that take up storage space and data on cell phones.

Though Africans are now using more smartphones because of affordable phone makers like Huawei and Tecno, video and photo quality still varies significantly from expensive premium phone brands. TikTok levels the playing field for all users regardless of the phone being used. As long as a TikTok creator has the app, they can use the full range of features offered, that are periodically updated without adding third party apps.

TikTok’s most popular creators in the US have been able to parlay their following on the app to full fledged careers.  TikTok’s most followed creator Lorengray has skyrocketed from TikTok star to actress and music artist. The potential for African users to do the same on the platform is not quite there yet, but there’s plenty of promise as there are fewer legacy barriers unlike Hollywood.

The app has become a major platform for brands looking to  monetize user attention, especially that of Gen Z audiences. Big brands like the NBA, Chipotle and the Washington post have taken to TikTok with creative ideas for brand exposure.

TikTok’s largest user base in Africa is Gen Z and millennials, according to TikTok representatives. With a youth population that is expected to double by 2055 TikTok may become the core marketing tool for brands in Africa as it has in China and the United States.