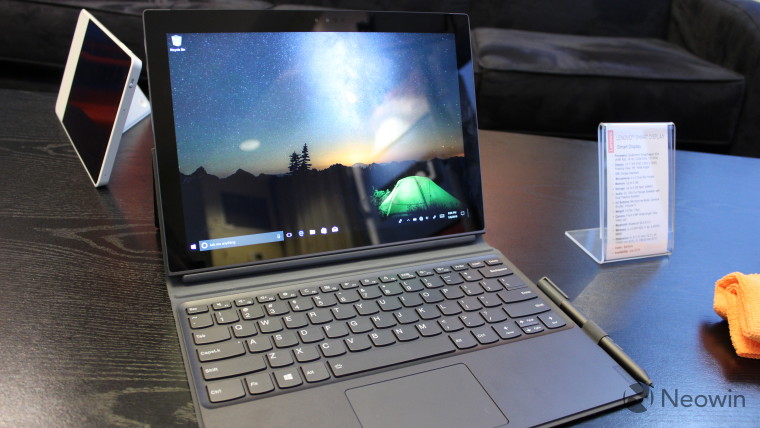 Announced at CES this year, Lenovo’s Miix 630 is the third Windows 10 on ARM device, powered by Qualcomm’s Snapdragon 835 chipset. Lenovo was one of the three launch partners to be in the first generation of Windows on ARM devices. Like both of the other devices in its class, it ships with Windows 10 Pro in S mode, meaning that you can only run apps from the Store unless you switch out of S mode for free.

Of course, this isn’t Windows RT all over again. Announced in 2016, Windows 10 on ARM can emulate x86 apps to run on Qualcomm’s Mobile PC Platforms. There are some limitations, such as x64 emulation and lack of Pro features like Hyper-V, but this is meant to just be Windows, and the average user shouldn’t even know the difference.

The Miix 630 isn’t cheap. Coming with 4GB RAM and 128GB of internal storage, it will run you $899. The real value proposition is 4G LTE connectivity and the additional battery life that comes with an ARM processor. The Snapdragon 835 uses big.LITTLE architecture, using four powerful cores to handle the heavy tasks, and four efficient cores to handle the tasks that don’t require as much power, such as background notifications. Because of this, an ARM processor can deliver much better standby time than an Intel chip.

The Snapdragon X16 4G LTE modem is built into the Snapdragon 835 chipset, so every Windows 10 on ARM PC can support up to gigabit download speeds over cellular, assuming your carrier supports it in your neighborhood (it probably doesn’t). The ability to not have to worry about connecting to Wi-Fi is an extremely freeing feeling although to be fair, there are Intel-powered Always Connected PCs as well, and some of those even use the same Snapdragon X16 modem.

Check out our unboxing of the Lenovo Miix 630 below: