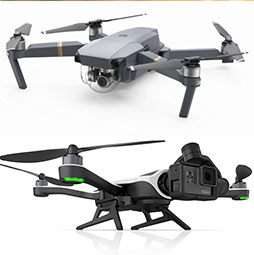 GoPro’s ambitious plans to be a player in the fledgling drone market crashed last week when it had to announce a product recall due to Karma UAV units falling from the sky.

The company needed to resolve a performance issue related to loss of power during operation, it said. It indicated it would resume shipment of Karma at some point, but didn’t suggest when.

The Karma recall likely will have a significant financial impact on GoPro.

“With the amount of competition in the consumer drone space, it is imperative to satisfy demand, or that demand will shift to another product,” said Michael Blades, a senior industry analyst at Frost & Sullivan.

“The longer Karma is sidelined, the less chance it has of grabbing significant market share,” he told TechNewsWorld.

GoPro’s stock price had begun slipping before the recall and has continued to decline steadily, Blades added.

“The impact will be on stock price and revenue,” he said.

“In the two weeks it was available, GoPro sold around 2,500 Karma drones and surely had been anticipating strong sales for the Karma drone from Thanksgiving on. That revenue is now lost,” he told TechNewsWorld.

“Worse, GoPro had been counting on the Karma to drive sales of its new GoPro Hero5 and Hero5 Session cameras, and now that opportunity has also been lost,” Hyers added.

Since Karma was GoPro’s first UAV, the drone was supposed to establish the company’s reputation in the market. It has done that — but not in a good way.

“Given that the Karma is GoPro’s first drone, and in many ways was seen as the future of the company, it’s recall has to be viewed as devastating for its reputation as a drone maker and its ambitions in the drone space,” said Hyers.

“Drone buyers are more likely to avoid GoPro in the future, with severe consequences for the company’s future drone and camera sales,” he noted. “There are simply too many very good drone alternatives available on the market for buyers to risk giving GoPro another chance.”

The recall emphasizes the fact that GoPro is a camera company and not a drone company, Frost’s Blades added.

“GoPro should not have been expected to develop a perfect product with its first drone,” he said. “However, the market is innovating so quickly that if your product is not better or more capable than the latest products, you will likely fail.”

Consumer interest in UAVs has been less than anticipated by the industry, and the Karma recall isn’t going to improve that, observed Brad Russell, a research analyst with Parks Associates.

Less than 5 percent of U.S. broadband households own a drone, and less than 4 percent said they were interested in owning one at the beginning of the year, he noted.

“Negative drone stories in the press and mechanical failures, such as GoPro’s recent troubles, are likely stifling consumer interest outside of film and video professionals and enthusiasts,” he told TechNewsWorld.

Even without the recall of Karma, GoPro’s prosumer drone strategy may be flawed, suggested Philip Solis, a research director at ABI Research.

Although revenues from prosumer drones amount to about half of the $1 billion consumer drone market, those drones represent only 6 percent of drones shipped in the space.

“GoPro’s strategy should be to use drones to expand the sales of their cameras, but they’re pricing themselves into the prosumer space, which is low volume, which means a very tiny amount of additional cameras sold,” Solis told TechNewsWorld.

What’s more, by selling Karma at $799, GoPro is going head-to-head with the established leaders in the market, DJI and 3DR. “If you’re not DJI or 3DR, it’s awfully hard to compete in the market,” Solis said.

“If they had a product at $400 to $600, they could compete better in the market and sell a lot more cameras,” he maintained.

“The Karma drone has been a debacle for GoPro, and it will be extremely challenging for them to bounce back in the drone market after such an awful start,” said Strategy Analytics’ Hyers. “Going forward, GoPro should partner with another drone maker and outsource drone development. It’s clearly not ready to do it on its own.”

JAPAN’S £139m COMPUTER WILL BE FASTEST IN THE WORLD,MAKING 130 QUADRILLION CALCULATIONS A SECOND