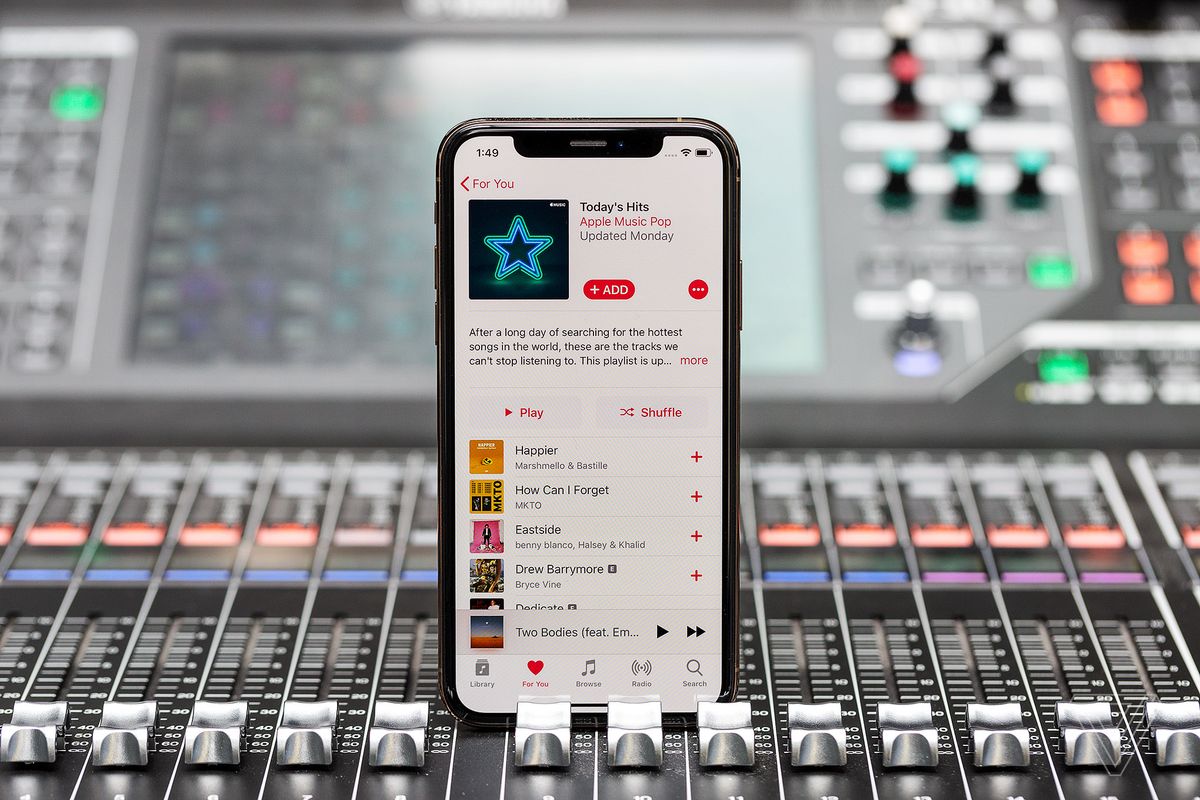 Apple’s focus is shifting. In recent years, iPhone sales have begun to plateau, and now Apple’s services business — which encompasses everything from the App Store to licensing deals — is being positioned as its next big frontier for revenue growth. More than ever, Apple wants to sell people constant, ongoing subscriptions for things they can do on their phones.

That new direction is going to be thrust into the spotlight next week at Apple’s “It’s Show Time” event, where the company is expected to unveil two big new subscription services: a TV service for original shows and movies, and an Apple News service that will bundle together premium news sources and magazines.

Apple’s services business brought in over $10.9 billion during the most recent quarter, setting records in “every geographic segment” in the process, according to Apple CEO Tim Cook. Cook also said that Apple is on track to double its services business from 2016 to 2020. Last quarter saw a 19 percent increase year over year.

It’s a substantial figure compared to Apple’s other business segments: services already brings in more per quarter than the Mac ($7.4 billion last quarter), iPad ($6.7 billion), or the collected “Wearables, Home, and Accessories” group of products ($7.3 billion). And that balance will likely only continue to shift as Apple starts to push services harder and introduces new services to which people can subscribe.

So what’s already bringing in all that services revenue, and how healthy are those businesses? Apple doesn’t break down how much money individual services make, so there’s a large extent to which we just can’t say. But we do know what businesses the segment is composed of, how much they charge, and whether they’re any good. With the services business entering a new era, here’s an overview of where it stands today.

Apple Music is arguably the highest-profile entry in Apple’s new services business, due to it being one of the most modern (it launched in 2015, after Apple bought and rebranded Beats Music) and one of the most interesting (sorry, extended warranty programs).

It’s unclear how many of Apple Music’s customers are actively paying. The company offers free trials, and its service also comes bundled with some Verizon wireless plans.

Assuming all customers are paying $10 per month (with family plans, annual discounts, bundles, and student deals, they’re not, but this is ballpark numbers here), that puts Apple Music at a high-ball estimate of $6.7 billion per year brought in.

THE APP STORE PAID OUT $100 BILLION OVER A DECADE; BUT EVERY TOP GROSSING APP ON THE PLATFORM IS A SUBSCRIPTION OR A FREE-TO-PLAY GAME

Probably one of the biggest contributors to Apple’s revenue is the massively popular App Store, which was estimated as of May 2018 to have seen upward of 170 billion downloads in its 10-year history.

Those “free” apps have resulted in some pretty big sales: as of June 2018, Apple had paid out $100 billion to developers from the App Store. If you work off of Apple’s 70 / 30 revenue split (which is usually, but not always, the cut it takes from purchases), you get total sales of roughly $142 billion, with $42 billion of that going to Apple in the decade it’s been running the App Store.

That said, Apple has recently come under fire for the App Store model in the past few months: the Supreme Count is hearing an iOS App Store antitrust lawsuit that alleges Apple has an unfair monopoly on iPhone apps. And Spotify has filed another antitrust complaintover Apple’s 30 percent cut with the European Union, complaining that it gives Apple an unfair advantage when promoting its own streaming service, Apple Music.

Theoretically, every single Apple customer who owns an iPhone, iPad, or Mac is an iCloud user, because Apple gives a paltry 5GB of storage to all customers for free. But for revenue, the important part here is the paid plans, which give users additional storage for a monthly cost.

iCloud may not have the same brand recognition as Dropbox or Google Drive when it comes to storing and sharing files, but it does have some big advantages in getting users to subscribe: it’s the only way to back up iPhones and iPads to the internet. And that storage pool counts toward nearly everything on your phone. Take too many pictures, for example, and your phone stops backing up, which creates a real incentive to shell out for more than the scant 5GB Apple gives for free.

Apple seems to know that, too: the cheapest iCloud plan is just 99 cents per month for 50GB of storage, making it an easy sell to users, but that $12 per customer per year starts to add up across the billion-plus iOS devices out in the world, even if only a fraction of them subscribe. A 2016 interview with Apple SVP Eddy Cue revealed that at the time, there were 782 million iCloud users, but Cue’s comments referred to all users — Apple has never broken out how many paid subscribers it has.

The iTunes store isn’t the juggernaut it once was — with streaming services like Spotify, Apple Music, Netflix, and Hulu, people just tend to buy fewer songs, TV shows, and movies nowadays. But it still does bring in money: it’s a one-stop-shop for a huge range of content, and like all of Apple’s other services, it’s front and center on all its devices. Want to rent a movie on your Apple TV for a movie night? iTunes is right there, ready and waiting. And with Apple expanding iTunes to other devices, like Samsung smart TVs, it seems like iTunes is still a big part of Apple’s revenue strategy going forward.

Also included here is Apple Books, which is basically iTunes, but for books. Apple Books has the issue of Amazon and its massive Kindle library as competition, which Apple infamously tried to solve in a price fixing scandal that cost the company $450 million. Even so, it’s still one of the biggest ebook stores around, and is another easy source of service revenue.

Lastly, iTunes also includes Apple’s less popular iTunes Match subscription service, which costs $25 per year and syncs users’ iTunes music across their devices, sort of like a private cloud music service where you have to buy all the music.

THERE WERE 1.8 BILLION APPLE PAY TRANSACTIONS LAST QUARTER, MORE THAN DOUBLE THE YEAR BEFORE

Apple says it doesn’t charge “users, merchants, or developers” to use Apple Pay, but reports indicate that it still receives a small fee from each transaction. That cut appears to come from the bank that issued the card with which Apple Pay is being used. Reports from 2014, when Apple Pay launched, said the fee for US banks was 0.15 percent, or 15 cents on every $100 spent.

Last quarter, Apple said there were 1.8 billion Apple Pay transactions, more than twice as many as the same quarter a year earlier. We don’t know how much those transactions are worth, and it’s likely that the vast majority of them happened outside the US, in countries where mobile payments are more popular. But that’s still a large volume of transactions where Apple takes a cut.

Apple also makes money off of Apple Pay Cash. The service is free to use when sending money with a debit card, but it charges a 3 percent fee for any funds sent using a credit card.

AppleCare+ is Apple’s extended warranty service: it lets customers get longer and more comprehensive warranties for their Apple products, usually with things like discounted screen or device replacements, depending on the device.

AppleCare+ is also included as part of the monthly cost of Apple’s iPhone Upgrade Program. Like many of the other Apple services, the company hasn’t said how many users opt to buy the extended warranty.

This isn’t quite a consumer-facing service like everything else on this list, but it’s a big business. Apple sells licenses to companies to get their services built into iOS, like how Google is the default search engine or The Weather Channel provides weather data. That kind of front row real estate on all of Apple’s devices is worth a lot, and it provides a big chunk of Apple’s services revenue.

Licensing agreements are a particularly opaque area of Apple’s business. The last clear numbers we have are from 2014, when court documents revealed that Google paid Apple $1 billion to stay the default search bar on iOS as part of the company’s revenue sharing agreement. But recent estimates from analysts have put Apple’s fee at roughly $9 billion — a number that, if true, would make it one of the biggest parts of Apple’s entire service group all on its own.

Cost: Nothing, unless you prefer Bing for search.

How Apple makes money: Licensing payments from companies like Google to be featured on Apple products.

This is where things get weird: As of its most recent quarter, Apple now takes part of the sale price of every iPhone, iPad, and Mac and converts it into money for services, which it then spreads out across multiple quarters. Basically, Apple counts “free” services like Maps, Siri, and parts of iCloud (like iMessage), and considers them to be built into the cost of its devices.

It’s a meaningful shift, too: when Apple started factoring in payments for these free services, its total service revenue for Q1 2018 jumped 7.7 percent, from the originally reported $8.47 billion to $9.13 billion.

Cost: Free? But also you’re technically paying for it when you buy your iPhone.

Correction: Only Samsung smart TVs will have the iTunes app, not LG TVs (although those will have AirPlay 2 and HomeKit).

The best Android smartphones you can buy right now (Spring 2019)