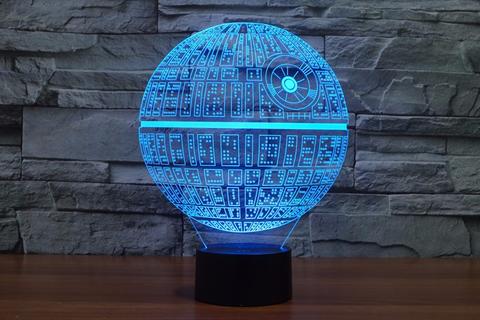 Thanks to Rogue One: A Star Wars Story, the Death Star is en vogue again, which also means there’s no shortage of Death Star merchandise flooding the market. And despite it being a super weapon capable of extinguishing billions of lives with one blast, this Death Star lamp might make it easier to drift off to sleep at night if you’re stressed about other things.

Packed inside both the 12-inch tall lamp’s shade, and miniature Death Star base, are white LEDs that won’t draw quite as much power as the real Death Star did, which relied on hypermatter reactors that eventually led to its destruction.

Pressing the Death Star’s superlaser focus lens cycles the $50 lamp’s LEDs, letting you illuminate just the shade, just the Death Star, or both at the same time. You can’t open it up to change the bulb’s, or swap them for a different color, but the included LEDs are rated to run for 60,000 hours so by the time it burns out, who knows what the current crop of Star Wars movies will be focusing on.