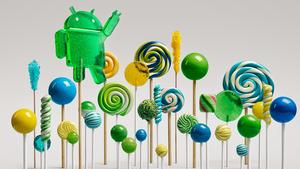 We’ve been running Android Lollipop for a few months now, back when it was known only as Android L, and you can see the new features and screenshots

If you’re buying a Nexus 6 or Nexus 9, you can get Android Lollipop from November 3rd. But if you already have a Nexus 5, 7 or 10, you should get it in a free over-the-air update in the “coming weeks” according toGoogle’s blog. Of course, if you want to, you can try the beta version now by following our guide: How to get Android L now.

Earlier today, Google has released a teaser video for Android L with lots of possible names including Lemon Drop, Lady Finger, Lava Cake and Lemon Meringue Pie. A notable name missing was Lollipop and now we know why.

Below are all the rumours we collated in the run up to today’s news from Google:

More recently, a report from Bright Side of News states that Google will put the Nexus 9 up for pre-order on 15 October – that’s today – with it set to go on sale 3 November. We sincerely doubt Google would launch the Nexus 9 without the final version of Android L, so it looks as though the finished OS could be unveiled this Wednesday and roll out to other Nexus devices (and some high-end KitKat phones and tablets) from 3 November.

It’s widely thought that the name, following the alphabetical list of sweet treats, will be Lollipop. However, according to TK Tech News it will be Lemon Meringue Pie after all. Previous versions include KitKat, Ice Cream Sandwich and Honeycomb. It’s codenamed ‘Moonshine’. See also: Android L vs iOS 8

The latest rumour is that Google will partner with Nestle once again, this time to produce Android Lion. The rumour came about from a screenshot (below) showing Nexus 5 information leaked by @EMTLeaks.

Google has revealed a new design language for the Android L release which is called ‘material’. Overall, it’s a cleaner and very Google style which developers can make use of in apps. The Roboto font can also be used anywhere. You’ll notice that the new navigation buttons are a triangle, circle and square. See also: First Android L screenshots: how the new material design looks on the Nexus 5.

Elements can now be given depth, so shadows and light sources affect user interface elements in real time. App interfaces will now feature touches of colour automatically generated based on the content and there are new animations and touch feedback.

You can see the new look in the above and main article images including new icons and new navigation buttons. Take a look at Google’s video below to get an idea of what new Android L will look and feel like.

Android L will make notifications even better. For starters you can get them on the lock screen – and they will be automatically ordered in priority. You will be able to swipe them away like normal or double tap to open the relevant app.

Part of the Android L redesign is a new lockscreen which will show you notifications (see above image). You’ll need to swipe up to unlock (if you don’t have a lock pattern or other unlock method) but you can also swipe right to launch the dialler or left to launch the camera.

Forget a 2D list of open apps, the new recent apps section of Android L brings a Google Now card style layout. The open apps flow on a sort of carousel and can be swiped off to either side to close them as before.

It’s not working on the developer preview but some apps, for example chrome, will be able to have multiple cards in recent apps. Android L will show a separate card for each open tab.

The Android L notification bar looks quite different to before. It works in the same way as before so a swipe from the top of the screen grants access. There’s a new layout and colour scheme.

Instead of tapping a button to access quick settings you simply swipe downwards a second time. There is now screen brightness control as standard and a new ‘cast screen’ icon for mirroring with a Chromecast.

Google said that security is a key element for Android and its users. A new feature will enable users to unlock their smartphone when physically near enough a device like an Android Wear smartwatch. It’s a bit like cars with keyless entry.

Better battery life is something we always want and Google promises that Android L will bring it via a new battery saving mode. Project Volta will allow developers to identify how their apps are using battery so they make improvements.

Google said that the new battery saving mode will give a Nexus 5 an extra 90 minutes of power. The battery section of the settings menu now gives more detailed information, too.

As we expected, Android L will support 64-bit processors and it will also support the ART software library which Google says will be twice as fast as Davik.