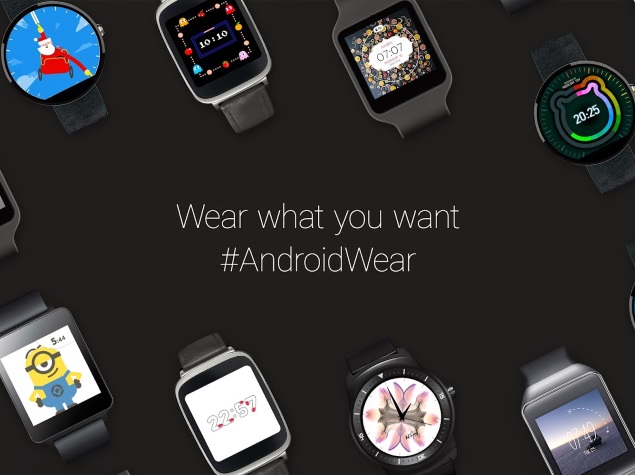 “Over the next week, the latest release of Android Wear, based on Android 5.0 and implementing API 21, will roll out to users,” the blog notes.

The update will allow users to manage and configure watch faces in the Android Wearapp on the smartphone and will also let install watch faces from Google Play.

The company on its Android blog titled “Android dress code: wear what you want” also announced new watch faces for consumers alongside other improvements for the smartwatch. The blog said, “Today there’s even more ways to show your style with Android Wear, including dozens of new watch faces (powered by an official Watch Face API), a full collection of devices on Google Play, and lots of other improvements based on your feedback.”

Some of the downloadable watch faces can be searched on Google Play’s watch facepage. “We’ve got dozens of examples to get you started-from the unpredictable Minions in Despicable Me to the X-Ray artistry of Hugh Turvey. And because the new Watch Face API is available to all developers, you can expect even more choices in the weeks and months ahead,” the blog added.

Apart from watch faces, Google has also updated the Android Wear app for smartphone to make browsing, downloading, and switching watch faces easy. It adds, “Both updates are rolling out over the next week, so don’t worry if you don’t see them yet.”

In the below video, Google’s Timothy Jordan introduces the Watch Face API for Android Wear. The Watch Face APIs will allow developers to customise UI features of the Android wearable.

The company further revealed that since the launch of Android Wear, developers have written thousands of apps.

Some of the Android Wear based smartwatches currently available in markets across the world are the Asus ZenWatch, LG G Watch, LG G Watch R, Moto 360, Samsung Gear Live, and the Sony SmartWatch 3.