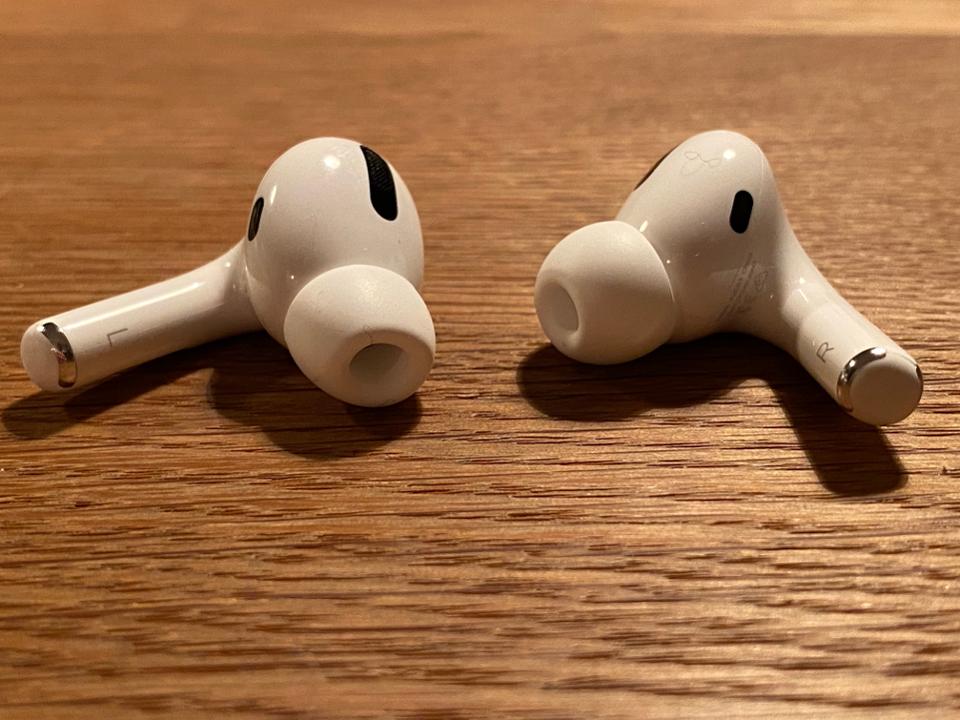 Apple AirPods Pro were announced on Monday, October 28. I’ve been using the new true wireless in-ears since literally minutes after they were unveiled and testing them almost non-stop. Seriously, I’ve barely slept.

The new Pro model, in stores from Wednesday October 30, comes with a price hike – $249 compared to $159 for the entry-level AirPods, which continue to be on sale. The model with the wireless charging case costs $199, so this new version is still pricier than that, though the new case does come with wireless charging as standard at least.

So, are they any good, are they worth it and which model should you buy?

The New Design Is Different, But Unmissably Apple

Gloss white plastic with metallic accents: that first impression could apply to any AirPods. But look more closely and you’ll see the new in-ears are very different, even if instantly recognizable as being designed by Apple. Today In: Innovation

The case is the same oblong with rounded corners, though this time it’s wider than it is tall rather than the other way around.

The basic design is similar – a charging socket in the base and a hinged lid. Oh, and it charges via Lightning cable just as previous AirPods did. This time the cable in the box is Lightning to USB-C rather than to USB-A.

The AirPods themselves have much shorter stems than before and are bigger up top, with a rounder earbud to nestle in your ear – it definitely feels like a snugger fit this time around.

Although they are very slightly heavier than previous AirPods, they don’t feel heavy, not least because more of the unit sits in the ear.

The finish is slicker, smoother and more high- end, all gloss apart from one matte panel which is the touch-sensitive panel that we’ll come to shortly.

Some people have always felt AirPods look a bit weird when you’re wearing them. You’ll have to make your own mind up but I think these look pretty great, in or out of the ear.

The Fit is All-New

Instead of the one-shape-fits-all earbud on the AirPods, Apple has radically rethought things this time around. Now there are silicone earbuds designed to fit deeper into the ear and offer a complete seal against the outside world noise so it’s just you and your music.

Flexible though the silicone tip is, it’s not versatile enough to fit everybody’s ears. So, along with the medium tips installed on the AirPods Pro, there are two more pairs, small and large, tucked away in the bottom of the AirPods Pro box. Just in case you’re not sure which is the perfect fit for you, Apple is ready to help.

Pairing AirPods Pro is the same incredibly easy process as before: open the charging case near to your iPhone and… well, that’s more or less it. Here, though, there’s an extra feature – the Ear Tip Fit Test. With the AirPods in your ears, it’ll play music, briefly.

Inside the AirPods there’s a microphone facing inwards. As the music plays the microphone is listening and can tell from what it hears whether the seal is good enough or not. If it’s not, it’ll advise adjusting the position of the bud in the ear or trying one of the others.

Incidentally, if you want to take the test again, simply go to Bluetooth and select AirPods Pro.

I did it a couple of times and it turns out my perfect fit is a small tip in the left ear, medium in the right. Well, nobody’s perfect.

Apple also points out that it has devised a simple but effective connection system which ensures the silicone tips stay in place perfectly until you want to remove one, in which case, I recommend a firm action. Be bold.

This system is also there so you don’t have to worry about an earbud getting stuck in your ear when you remove the AirPod Pro. The only time I had any issue was the one time I didn’t hear a satisfying click as I pushed the tip onto the earbud. Guess what? Next time I took the AirPod out of my ear, the tip stayed behind.

The noise-canceling is uncanny

The perfect seal is stage one in getting great audio. Stage two, and the tentpole feature of the new headphones, is active noise cancelation.

As well as the inward-facing microphone, there’s one listening to the outside world. It takes the sound it hears, and generates a sound that’s 180 degrees out of phase so the two sounds cancel each other out.

Sometimes this works well – think the stunning Bose 700 Headphones – and often not.

Here, it’s nothing less than stunning.

I tested the AirPods Pro on the London Tube, and though I still knew I was in an underground train, all kinds of noise were muted or at least reduced. Conversations around me which had previously been audible, if not actually interesting, faded away as if it were a dream-like special effect. Which, I suppose, it is.

For those situations where you want a balance of your music and the outside world, Apple has something it calls Transparency mode. With previous AirPods, to hear someone talking to you, you’d have to take one bud out of an ear, in itself a highly natural thing to do. When the sensors recognized you’d done that, the music would pause.

All that still works, of course. But now, you can carry on listening as well as hearing what’s happening outside. That’s good if you’re walking down the street, for instance. Transparency mode means the microphone on the outside lets in the outside world which, by the way, includes your own voice which would otherwise sound muffled because of the AirPods in your ears. But it also plays the music at a lower level.

This is a great feature and I’ve been using Transparency mode a lot.

The little matte, flat area on each AirPod stalk is what Apple calls a capacitive force sensor. It’s there to help you navigate your music, for instance. On earlier AirPods, you’d tap the stalk firmly. But doing that now isn’t quite as pleasant, bouncing the spongy silicone tip into your ear. So, that sensor is the answer. Press once to answer a call or pause or play a track.  Press twice to skip forward, three times to go back.

Most useful of all, you can press and hold the sensor – I found this easiest by squeezing the stalk. When you do this, the AirPods toggle between noise-canceling and Transparency mode.

So you know you’ve done it, a chime sounds. Actually, there are two chimes and the one that goes with switching to Transparency honestly has something more airy and open about it.

You can also control the toggling from the iPhone by opening Control Center and long-pressing on the volume slider – noticing in passing that the volume slider has a tiny icon of the AirPods Pro on it. The slider will open to a new screen with three buttons at the bottom: noise-canceling, Transparency and Off.

Audio Quality is a Big Step Up

Compared to regular AirPods, the sound quality here is considerably improved, even with noise-canceling off. But, to be honest, you’ll want it on most of the time because it sounds amazing.

I once asked a Sony executive what noise-canceling should sound like – because on some headphones it can have a heavy, oppressive feel, like you’ve just died, I imagine. The exec said it should sound like the silence in a concert hall between movements. Alive, in other words, and present.

That’s certainly the case here. The Apple active noise-canceling has a warm, inviting tone to it.

Nothing new here. The new AirPods have the same battery life as the old ones. That’s five hours from the buds and another 19 hours of juice in the case. If you have noise-canceling or Transparency on, you can knock half an hour off the time. These are Apple’s figures but so far I’ve found they easily match this claim.

The audio quality alone, I think, justifies the price. It’s on a par with the Sony WF-1000XM3 in-ears, which is just tremendous. Those earbuds are a little cheaper than these but they are a bit bulkier, a bit less attractive. Oh, and the Sony charging case is much bigger.

With AirPods, you’re not just paying for the sound. Assuming you have an iPhone to pair it to, the simplicity with which the gadgets work together is a big part of the overall experience – the way the AirPods automatically switch from your iPhone to Mac when the same Apple ID is on both. It’s pretty cool.

You’ve probably spotted, I’m pretty smitten with these new earbuds. The look is great, the fit sublime and the audio quality, particularly with noise-canceling turned on, is pretty amazing. Apple is up against serious competition these days, from Sony, the new Amazon earbuds and an upcoming pair from Huawei.

But AirPods Pro puts the company out in front, matching snappy design with great features, sublime operation and dazzling sound.