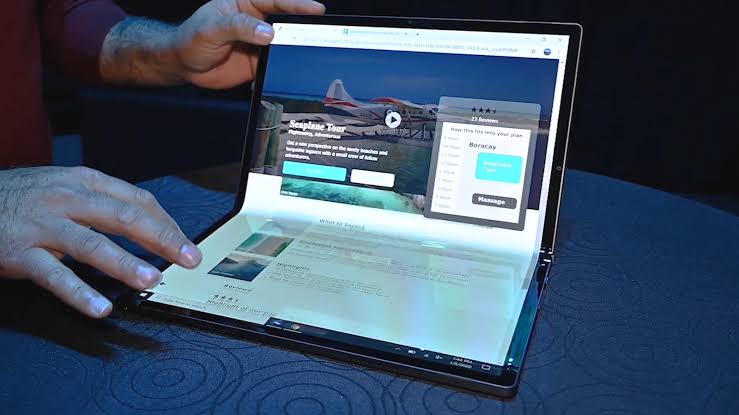 At CES last week, Intel revealed its Horseshoe Bend foldable-screen computer prototype. Lenovo demoed another foldable-screen X1 laptop that it co-engineered with Intel. When unfolded, both devices resemble large tablets, but as you bend the screen upward, they feel much more like laptops.

This isn’t the first time companies have attempted to merge tablets and laptops — Microsoft infamously tried with Windows 8 — but with Intel and Lenovo’s new computers, the hardware is adaptable, rather than only the software. And unlike foldable phones, which are great marketing tricks with few realistic benefits, this new segment of computers will change how we use both laptops andtablets: They’ll merge the two categories into one.

Tablets and laptops have remained separate categories largely because their physical design simply can’t do both jobs well — tablets are usually all screen, and a laptop typically has a keyboard glued to the lower half that can’t be changed.

While laptop sales have slowed since tablets arrived, devices like the iPad, which has dominated the category, still aren’t perfect replacements. It’s awkward to hold an iPad and type on it for long lengths of time, so people often buy the keyboard case to make it act more like a laptop or relegate the iPad to watching Netflix. There’s simply no middle ground without awkward cases, attachments, or stands that end up making tablets more like a laptop in the first place, defeating the point.

Owning a tablet and a laptop will feel ridiculous, because a single device will do the job of both devices.

Meanwhile, laptops lack the magic of a tablet. While Windows supports touch and pen input, it’s a tacked-on experience at best, with few apps truly taking advantage of touchscreens. Laptops are also generally much bulkier and have a shorter battery life.

But a foldable tablet’s display size and shape no longer restrict how the device can be used. Adding a fold means you can prop up the device without a kickstand, for example. It also means you can fold it the opposite way to halve its size for use in tight spaces like airplanes or even safely fold the screen inside the clamshell when you’re not using it, like you would a laptop. When the device is folded open, it has a large, glorious screen — the Intel prototype measures 17 inches fully unfolded — with nothing else in the way.

The new generation of foldable-screen devices is a peek at a future where owning a tablet anda laptop will feel ridiculous, because a single device will do the job of both devices.

Naysayers will point out the benefits of keyboards and physical keys and that it’s more difficult to type on a flat display. While that may be true, the iPhone’s success shows that this is unlikely to be a problem; the adaptability and flexibility of virtual on-screen keyboards beat out the need for the physical keys found on the BlackBerry and ultimately opened up new opportunities for developers to use the screen real estate. And for those who remain attached to real keys, there will always be the option to attach a traditional keyboard.

Still, the success of truly foldable-screen devices is far from assured. Manufacturers aren’t yet committing to prices or availability. Lenovo provides just a vague “2020” timeline and says that it “expects” pricing to start at around $2,499.

New categories are risky, as Samsung discovered with the debut of its foldable phone, the Galaxy Fold, which was discovered to break easily almost as it debuted. As manufacturers race to be the first to market, we may see one or two foldable-screen laptops become publicly available, but their longevity with remain a question.

Microsoft is building a new version of Windows, labeled Windows 10X, that will address some foldable-screen capabilities. It debuts later this year with the Surface Neo, the company’s own foldable-screen device. The software is specifically designed to adapt to devices that morph in shape and size, like the Neo and X1, but it’s not yet available to manufacturers.

The Neo, as well as larger devices from manufacturers like Asus, will likely arrive much sooner in stores than the CES prototypes since they are a different type of foldable. They sport two distinct displays with a hinge connecting them, rather than a single display that folds — a technology that is much easier to achieve.

Manufacturers of truly foldable screens still need to ensure the devices can reliably fold without breaking over the long haul — but their demos forecast a future where our devices adapt to us, rather than the other way around.