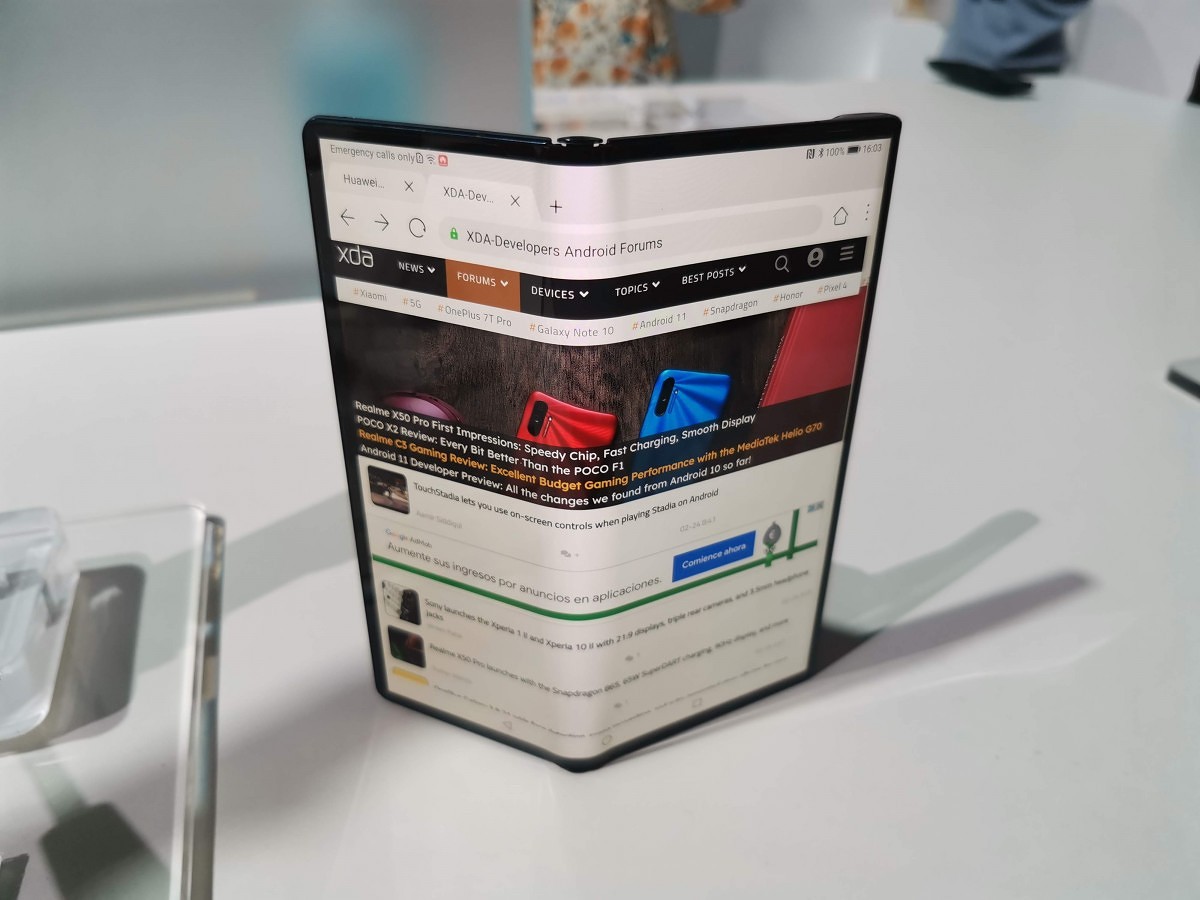 It’s the year of foldable smartphones, it seems. The Samsung Galaxy Z Flip, a Samsung Galaxy Fold 2 in the works, the Motorola RAZR, and now the Huawei Mate Xs want a slice of the pie. Huawei is no stranger to foldable smartphones, though their first device, the Huawei Mate X, only ever launched in China. Its successor, the Mate Xs, just got announced in Barcelona, and we got to spend some hands-on time with it. The foldable Mate Xs does not have Google Mobile Services pre-installed since Huawei is still on the U.S.’s Entity List. Instead, the device includes Huawei Mobile Services, which is the company’s alternative to Google Play Services. Despite this setback, Huawei is going full steam ahead without Google and with their own vision on what foldable smartphones should look like.

The Huawei Mate Xs is definitely top-tier when it comes to specifications, though you’d hope that’s the case at a price of €2,499. Huawei’s take on the foldable form factor is different than Samsung’s or Motorola’s. Huawei’s devices involve a display that wraps around the outside, rather than being protected on the inside of some kind of a clamshell design. The Mate Xs has a plastic screen that doesn’t feel any different from the Huawei Mate X. In contrast, the new Galaxy Z Flip notably features an ultra-thin layer of glass, though we’ve seen that the glass is more for form than function. Because the screen of the Mate Xs wraps around the device, there’s no need for a secondary display. Huawei claims that the Mate Xs has a durable “quad-layer” display along with a redesigned hinge mechanism to further prevent any accidental damage. The display is composed of two layers of polyamide film, followed by the flexible OLED display, a soft polymer for cushion, and finally a layer that connects the display to the body.

The Huawei Mate Xs is also powered by the HiSilicon Kirin 990 chipset, which launched alongside the Huawei Mate 30 last year. It has 8GB of RAM, 512GB of storage, and a 4,500 mAh battery.

Camera-wise, the Huawei Mate Xs is packing a main 40MP camera, an 8MP telephoto camera, a 16MP wide-angle camera, and a depth-sensing camera. All of these cameras are housed on the “rear,” but when the screen is folded, they can face the user. Speaking of the display again, it’s 8-inches in tablet mode and 6.6-inches when folded.

Huawei is very proud of the Mate Xs design, particularly when it comes to the lack of a notch, the design of the hinge internally, and the lack of a gap when the device is folded over. While there is indeed no notch and no gap, it can be quite annoying to take selfies, and it can also be quite a thick device. When trying to take a selfie, you need to fold the device, open the camera, activate the selfie camera, and then turn around the device to use the other screen. You can then keep using it like this if you want, though the phone will leave a large annoying message at the bottom of the display so that you don’t.

As for how the actual folding part of the Huawei Mate Xs works, it’s rather simple. When the device is folded entirely over, you can press an ejection button on the back (the button with a red stripe) which will release it and flip it halfway out. You then just need to pull it to open the rest.

The four stages of opening the Huawei Mate Xs

From there, you can use the Huawei Mate Xs just like you would any other Android tablet. Watch YouTube, play games, browse the internet, etc. When you want to put it away again, simply fold it back up again into its phone form.

Unlike with the Samsung Galaxy Fold, the Huawei Mate Xs doesn’t really have any compromises when it’s in phone mode. The screen isn’t a tiny placeholder to be used only when you can’t unfold the device – it’s entirely serviceable by itself. Sure it’s plastic and that’s a downside, but if you’re careful with the device things should be okay. However, nobody has had one of these for long enough to pass the test of time quite yet.

The Huawei Mate Xs is, more or less, the same device as the Huawei Mate X but with one or two key upgrades. It feels basically the same but has a newer chipset, redesigned hinge, and a better hinge mechanism. While I didn’t get enough time with the Mate Xs to test more than just the pre-installed applications, it was a lot of fun to play with to see how apps reacted to the device folding and unfolding. For example, the settings application would change from tablet mode to phone mode when you folded and unfolded the device; simple stuff that you’d expect to be the case, but may not necessarily have been implemented by Huawei. The Huawei Mate Xs is certainly a unique take on the foldable smartphone, but with Huawei pushing a launch without Google Apps on board, it might be a tough sell, especially at its €2,499 price.