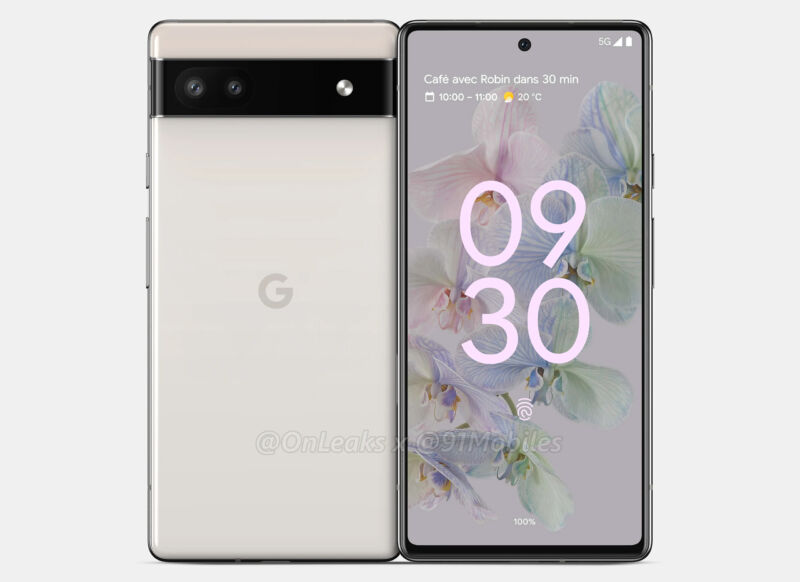 Google’s mid-range phone for 2022 is a smaller version of the Pixel 6.

The Pixel 6 only recently hit the market, but given that we’re regularly getting a six-month lead time on smartphone leaks nowadays, it’s time to talk about its mid-range cousin, the Pixel 6a. This weekend, OnLeaks and 91Mobiles graced the Internet with a render of what the phone is expected to look like, based on CAD files that need to be distributed to accessory makers.

Our closing thoughts in the Pixel 6 review expressed a hope that Google would carry forward its Pixel 6 work and build something that finally felt like a cohesive product line, rather than the yearly reboot crapshoot that the Pixel line has been since its inception. For the Pixel 6a, at least, it looks like Google is following that path. The 6a looks just like the Pixel 6, with a big rear camera bar, a two-tone design, a flat front screen with a centered hole-punch camera, and an in-screen fingerprint reader. This Pixel 6a render is barely distinguishable from the Pixel 6.

One major difference will be the size. While the Pixel 6 Pro is 6.7 inches, and the Pixel 6 is 6.4 inches, the 6a will slot in at 6.2 inches. CAD files should have pretty exacting dimensions for accessory makers, and OnLeaks says the phone is 152.2×71.8×8.7 mm. Again, that’s a big step down in size from the 75.9-mm-wide Pixel 6 Pro and the 74.8-mm-wide Pixel 6. People clamoring for a smaller Google phone will have something closer to what they want in the Pixel 6a, and a smaller size is a good way to cut costs on this mid-range device.

The black camera bar streaking across the back of the Pixel 6 instantly made it one of the most recognizable phones on the market. While the Pixel 6a is carrying this design motif forward, the camera bar is noticeably reduced in width compared to the Pixel 6. The camera bump also won’t be as tall, with the report saying the phone measures 10.4 mm, including the bar, while the Pixel 6 is more like 12 mm with the bar. We don’t have any concrete specs on the Pixel 6a just yet, but a camera downgrade is pretty likely. Google has used the same primary camera sensor—a Sony IMX363—in most Pixel phones, and it would not be surprising to see the same sensor show up in the Pixel 6a.

The Pixel 6a’s flagship-style design means it comes with some design touches people may or may not be happy with. The report says the phone has an in-screen fingerprint reader. These usually aren’t as fast as the rear-capacitive readers the Pixel A line has used previously. It looks like this will also be the first time the Pixel A line will ditch the headphone jack.

With no word on the specs, we can only speculate as to what SoC this phone will have. Google made a big deal about the launch of its first in-house chip, the Google Tensor SoC, in the Pixel 6. It doesn’t seem like the Pixel 6a would have the budget to include a flagship SoC, so Google will have to come up with something else. Since we haven’t heard of a mid-range variant of the Tensor, we’ll guess Google will go back to Qualcomm on its mid-range phone.

As always, it’s really hard to nail down the release date of the latest Pixel A phone. The Pixel 5a launched in August 2021, and we’re now getting Pixel 6a leaks in November 2021. Given that OnLeaks had both Pixel 5a and Pixel 6 renders six months before launch, we’re guessing we’ll see a May-ish release date.