The Apple Watch Won't Be as Cool as Announced: Your Top Headlines for Wednesday
Advertisement 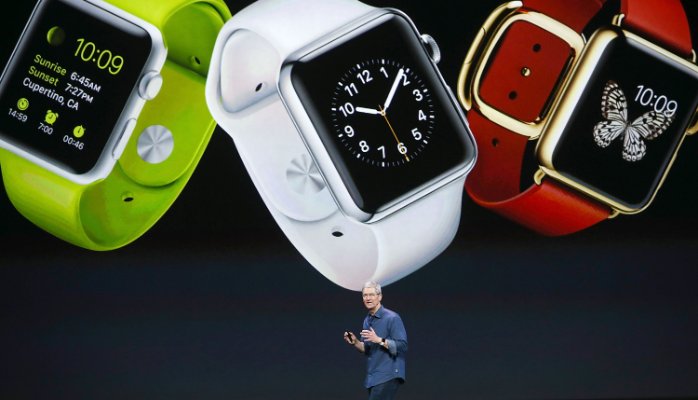 1) Apple has dropped all health-monitoring features from the Apple Watch, the Wall Street Journal reports. Either because it didn’t work, was too complex or was too regulated (but mostly because it didn’t work), the technology was simply scrapped from the watch’s first generation, due out in April, Daisuke Wakabayashiwrites. The device will still track steps, but not monitor blood pressure or stress levels through the skin. That sound you’re hearing is a collective sigh of relief from the offices of Jawbone, Fitbit and Withings, whose tech isn’t yet entirely obsolete. If Apple sticks by its usual schedule, they have another year to catch up before the dreaded competitor integrates the features in a second-generation device.

And so remains the question perfectly encapsulated in the WSJ’s headline: What exactly is an Apple watch for? “One of the biggest surprises people are going to have when they start using it is the breadth of what it will do,” CEO Tim Cook has said. A generalist tech then, a Pebble watch on steroids, which like the iPhone before it, will rely on a vibrant app ecosystem to allow each user to make the device their own. Apple Pay is also quite promising for the runner who has banned the fanny pack.

Apple is still planning a first production run of 5 or 6 million devices and is unlikely to have any issues selling them all: “The Apple Watch doesn’t have to do anything special at all for Apple to sell millions and millions of them,” notes, realistic, Wired’sMarcus Wohlsen. But I’ll say it again: with Apple, if you buy the first gen, you’re essentially a $349-poorer beta tester.

2) Snapchat is raising a new funding round of $500 million that would value it at $19 billion. That’s nearly double its current valuation and more than 6 times the amount Evan Spiegel turned down from Facebook a year ago. It would put the company somewhere between SpaceX and Uber in the billion-dollar startup club. I’ll leave it to you to assess what it means that Silicon Valley puts more stock behind ephemeral messaging than going to Mars.

3) “I’d love to work with Google.” The phrase is hardly original, but this time it was pronounced by Zuck himself. The Facebook founder says that connecting the entire world to the Internet isn’t a job for any company going it alone, not even Facebook (Internet.org), not even Google (Project Loon). The two companies are in constant contact, he said.

5) Nestlé is removing artificial colorings and ingredients from its chocolate candy in the US. The company says it’s looking after the health of its customers – let’s be frank: customers started looking after their health, and the company adapted. And we’re still a long way from being able to call a Butterfinger “healthy.”

6) Greece could be giving an inch in negotiations with its creditors. Athens could ask for a six-month extension on its lending program. Our friends at Quartz have a nice roundup of what’s going on behind closed doors there.

7) Of the $11.83 trillion of US household debt outstanding in the last quarter, the 1-and-change trillion in student loans is the most worrisome. While delinquency rates have been dropping on virtually all sorts of debt after the worst of the financial crisis, student debt is the one glaring exception, says a report by the NY Fed. The accompanying graphic tells all: 11.3% of student debt is delinquent 90 days or more.

And, notes the Fed, because student debt cannot be wiped in bankruptcy, a overwhelmed graduate’s credit score is marred forever. This level of debt stops young professionals buying houses or starting businesses. The NY Fed is planning a series of posts on the topic this week.

The car of the future is (finally!) on the way