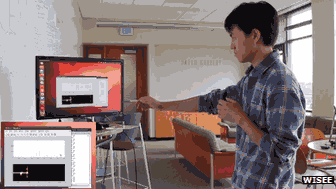 Microsoft unveils Xbox One console
Leap Motion seals deal with HP
Microsoft opens up on Kinect code
Researchers say they have found a way to detect and recognise human gestures based on how they affect wi-fi signals.

They suggest it could let users control home appliances with a wave of the hand while in any room of the house.

They say the WiSee system offers a “simpler, cheaper” alternative to Microsoft’s camera-based Kinect and other specialist gesture sensors.

However, other experts in the field question whether the new tech will be able to be as accurate.

Details about the project have been published by the University of Washington’s computer science department ahead of the Mobicom computing conference in Miami in September. The paper is a “working draft” and has not appeared in a journal.

Doppler effect
The researchers suggest offering an alternative to a vision-based system could make a range of home-based gesture controls practical.

“For example, using a swipe hand motion in-air, a user could control the music volume while showering, or change the song playing in the living room while cooking, or turn up the thermostat while in bed,” wrote lead researcher Shyam Gollakota.

To achieve this, the researchers have experimented with the Doppler effect – the way a wave’s frequency changes at the point it is observed depending on the source of the wave’s movements.

The best known example of the effect is how one hears the pitch of a train’s whistle change as a it approaches and then passes.

The team say a wireless router can be used to detect related changes in wi-fi signals – which are electromagnetic waves – as they reflect off a moving human body.

By using a specially developed software algorithm, the computer scientists say, they were able to distinguish nine different types of movements including a pushing motion, a punch, a circular hand movement and a kick.

To demonstrate the system, the team carried out tests in an office and a two-bedroom apartment.

They say their system was able to correctly identify 846 of the 900 gestures performed – a 94% accuracy rate.

They say these included situations in which the user was in a different room to both the wi-fi transmitter and receiver, requiring the waves to pass through walls before being detected.

Gesture passwords
The researchers acknowledge the risk of such a system being triggered by unintended gestures or even the risk of a hacker seeking to take control of a target’s equipment.

The researchers say their software can use a wi-fi router to detect when a human is making a gesture
To tackle this they suggest a password system that would involve the user repeating a preset sequence of gestures four times in order to ready their equipment for a command.

They say that an added benefit of this would be that it would reduce the risk of false positives – situations when the system mistakes natural variance in wi-fi signals for a gesture.

The researchers claim their equipment can work with up to five people in the vicinity of the router so long as it it is fitted with multiple antennas. But they note that the more people there are, the less accurate the system becomes.

They say their next step is to try to work out the best way to use the system to control multiple devices at once.

In the meantime they have set up a website to publicise WiSee, suggesting they want to bring it to market.

“Imagine that in the near future you would buy wireless router which could also do gesture recognition. WiSee enabled,” they say.

“Unlike other gesture recognition systems like Kinect, Leap Motion or MYO [sensor armband], WiSee requires neither an infrastructure of cameras nor user instrumentation of devices.

Limited accuracy
Dr Richard Picking – a human-computer interaction specialist at Glyndwr University in Wrexham – said the US team’s research had merit, but would still need to overcome several hurdles to become a commercial product.

“There is real potential for WiSee to compete with other devices in their established markets, such as gaming and entertainment,” he told the BBC.

“However, although the developers claim that it is unlikely that false commands could be triggered and that it is essentially a secure technology, there is a long way to go before people will be convinced that it will be reliable and safe enough to control household appliances.”

Another activity recognition expert – Daniel Roggen from Newcastle University – agreed that the system had potential, praising its idea of reusing existing resources rather than requiring the installation of cameras and other sensors.

Microsoft’s Kinect 2 sensor uses a 1080p resolution camera to improve its activity recognition abilities
However, he noted that the wi-fi equipment used by the researchers was more expensive than the norm, costing about 10 times the price of Microsoft’s Kinect.

“It remains to be seen if either a single such device is sufficient to cover an entire house and if the price of the equipment can be brought down,” he said.

“The activities presented in the paper are also very coarse. It remains to be seen if subtler human behaviours can be picked up.

“[By contrast] Microsoft’s Kinect is specifically designed for activity recognition. As such, it has an advantage over ‘opportunistic sensing’ approaches, and it can pick up subtler movements such as finger movements in its newest version.”