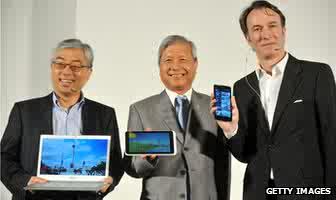 Ex-Nokia team makes rival smartphone
Dell posts 79% fall in profits
Google and Microsoft profits rise
A laptop running both Windows 8 and Android; a 6in (15.2cm) smartphone; and a hybrid mouse-touchpad are some of the devices to have been unveiled ahead of the start of Computex.

The tech show in Taipei, Taiwan runs from Tuesday to Saturday.

The event comes a week after researchers suggested PC sales were declining faster than had been thought.

IDC predicted that shipments of personal computers – including both desktops and laptops – would fall by 7.8% over the course of 2013. The firm had previously forecast a 1.3% decline.

It added that it believed tablet shipments would grow by 58.7% over the same period, putting them on course to overtake PCs by 2015.

Hon Hai is perhaps best know for making Apple devices at its Foxconn factories in China. However, analysts have suggested the firm could be responsible for assembling as much as 40% of the world’s consumer electronics.

Hon Hai said its Firefox line-up would include smartphones and televisions. It added that they would be released under others’ brands, rather than its own.

The news offers a boost to Mozilla’s HTML5-based OS which it is pitching as an “open alternative” to Android for low-end handsets.

WSJ report
That trend poses a potential problem for manufacturers since margins on tablets are often thinner than they have been accustomed to with PCs.

Hybrid devices
Acer kicked off the announcements with news of an 8.1in tablet capable of running the full Windows 8 operating system.

The firm described the Iconia W3 as being the first device that lets Microsoft’s desktop OS be used comfortably with “a single hand”.

The Taiwanese company also announced a 5.7in Android handset which it called its “first phablet” – signifying a cross between a phone and a tablet.

The Liquid S1 offers slots for two Sim cards – allowing consumers to use it with both their business and personal accounts. However, its 720p resolution screen and a lack of 4G support may limit its appeal to buyers wanting a high-end device.

Asus – which is also based in Taipei – announced the Transformer Book Trio as the centrepiece of its news conference.

The device is marketed as a three-in-one device which can be used as a desktop, laptop or 11.6in tablet. Its key feature is that it can run both the Jelly Bean version of Google’s Android OS and Windows 8.

The firm said users would be able to synchronise data between the platforms in order to enjoy a “smooth transition” between each mode.

Acer’s new line-up included what the firm said was the industry’s first 8.1in Windows 8 tablet
Other news from the firm included the Fonepad Note – a 6in phablet featuring a stylus and 1080p resolution display – and the Zenbook Infinity Ultrabook, a laptop which has toughened glass covering the back of its display. At 15.5m (0.61in) thick, it is thinner than Hewlett-Packard’s Envy Spectre 14 which pioneered the idea of a glass-clad laptop in 2012.

Perhaps more unusual was the company’s VivoMouse. The wireless device combines a circular touchpad and mouse into a single device which can be dragged across a surface or operated while being held in the air.

Dell’s 11.6in-screened XPS 11 laptop. The device’s screen is attached to its body with a hinge which allows it to be twisted round and folded back over the keyboard in a similar manner to Lenovo’s Yoga range.
Two new Android tablets from Samsung. The 8in and 10.1in Galaxy Tab 3 computers offer an alternative to the firm’s existing 7in model. The larger model is unusual in that it is powered by an Intel-made chip rather than one of Samsung’s own ARM-based processors.
Gigbayte’s Slate S10A – a 10in tablet which is one of the first Windows 8 devices to be powered by AMD’s new A4-1200 processor.

The US firm said last month that the processors would be 50% more power efficient than the previous generation, Ivy Bridge. However, full details about their capabilities are being held back until a press conference at Computex on Tuesday.

One analyst said the variety of computers on show was evidence of innovation, but warned that the amount of choice might end up leaving shoppers perplexed.

“Many users have already moved away from wanting a fully functional PC to an iPad, Android tablet or smartphone,” said Ranjit Atwal, an analyst at tech consultants Gartner.

“As a result that leaves a smaller audience and now the challenge for PC-makers is how to target this group, which is also – by its nature – likely to be more demanding.

“The problem is that by throwing so many different designs at the wall in an effort to meet the challenge of wooing them, they risk confusing shoppers rather than winning them over.”