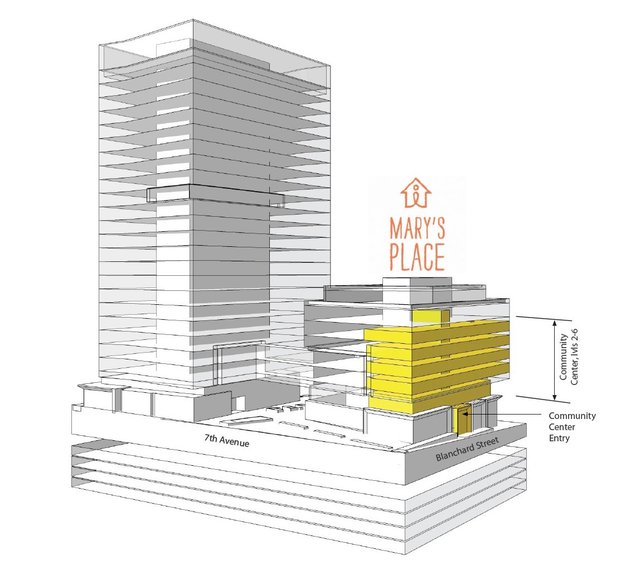 The planned Mary’s Place is highlighted in this rendering of two new buildings that Amazon will construct at its downtown Seattle campus. (Amazon.com)

Mary’s Place, a nonprofit that temporarily converts unused buildings into shelters for women and families in need, will soon have a permanent home — embedded in the heart of Amazon.com’s burgeoning Seattle domain.

The nonprofit currently operates a shelter in an old Travelodge near the core of Amazon’s new downtown campus, a place where those who find themselves without a roof in an increasingly expensive city can get back on their feet, while staffers help them find jobs and housing. The average resident lives there for 86 days.

The e-commerce giant, which owns the property, has let Mary’s Place use it for free since April 2016. But come October, the hotel will be torn down to give way to two new Amazon office buildings.

As part of that construction, Amazon will devote half of one of the buildings to Mary’s Place — giving it a six-story, 47,000-square-foot shelter that will house more than 200 people in 65 rooms. The capacity is similar to the temporary shelter it will replace, but the space is about 10,000 square feet larger.

It will be rent-free, with utility bills paid. Forever. And right next to the office space where Amazon workers reinvent cloud computing and the retail world.

“We finally got the keys to our own place,” said Marty Hartman, executive director of the nonprofit, showing off a large, golden key that Amazon’s head of real estate, John Schoettler, gave her — inside an Amazon shipping box — as a memento of the donation.

In a meeting with reporters, Schoettler called the arrangement “permanent, until homelessness is solved.”

The move — which Schoettler says will cost the company “tens of tens of millions of dollars” — is the Seattle company’s biggest philanthropic venture to date. It’s a big step up for a company that until a few years ago was considered aloof vis-à-vis local civic matters. It also comes in the wake of other high-profile engagements, from a big donation to the University of Washington computer-science center to giving space on its campus to FareStart, another prominent local nonprofit.

The idea also addresses a critical issue for the city — homelessness — that some say is aggravated by the breakneck growth spurred in large part by Amazon’s own expansion.

It comes as the number of families waiting for shelter increases, a phenomenon that stems from the city’s changing economics, as well as domestic violence and the high cost of health care, according to Hartman.

At the same time — by sheltering those left out of Seattle’s boom right at the center of Amazon’s $4 billion urban campus, teeming with tech gentry— the new high-rise facility for Mary’s Place will also highlight the yawning income-equality gap.

But Mary’s Place residents and Amazon’s Schoettler downplay any perceived tensions, pointing to the current friendly coexistence between the 63-room shelter that has operated on 8th Avenue for a year and its tony neighbors.

Amazon employees volunteer at Mary’s Place, and last August they threw a summer barbecue for families living there. At the kitchen where meals are prepared, there’s a fridge with a sign that says “Amazon Go” — containing donated meals that come from the highly automated experimental convenience store Amazon opened last December.

The new buildings, and the shelter within, will be completed in early 2020. The shelter will be separate from Amazon’s office space, with its own entrance, stairs and elevators.

Schoettler said his team had been discussing ways to permanently harbor Mary’s Place inside an Amazon building for about a year. On Jan. 12, he took the idea to senior management.

According to Schoettler, Amazon CEO Jeff Bezos pushed back his chair and said: “I love this. This is great.”

Schoettler said Bezos “loved the fact that it was unique, and that it was inclusive, within our campus, and thought that was very unusual and would allow us to do something different.”

In addition to the cost of constructing the new shelter, Amazon will have to find space somewhere else for the 300 employees that it had originally planned to put in the part of the building now allotted to Mary’s Place.

Amazon broke the news to Hartman, the Mary’s Place executive, last Thursday. It was a surprise — caught on videotape. She says she later got a call from Bezos. “He said: ‘Thank you for all you do,’ ” Hartman said.

While construction on the block that Mary’s Place currently occupies won’t start until October, the nonprofit will start in late May or early June to move its operations to a neighboring former Days Inn, also owned by Amazon, where it will have an additional 26 rooms. New people arriving will go to the new shelter, Hartman said.

Amazon’s gift is prompting Mary’s Place to boost its staff: Currently it employs about 160 across various shelters, including 66 full-time staff, and that is poised to double next year, Hartman said. Staffing costs are covered by other donations.

Hartman said Amazon’s gift has allowed the nonprofit the unique benefit of giving families their own rooms at its shelters systemwide, which helps them deal with the emotional and physical challenges of homelessness.

“Individual rooms are an incredible gift to families to maintain their individual dignity,” she said. It also lets multigenerational families and those with pets stay together under a roof.

Gricelda Torres moved to the Seattle area about three years ago from South Texas. After losing her apartment last year she couldn’t find a shelter for her family of eight, which includes her husband and six children. But at Mary’s Place, where the family has been since December, they have space. ”We have two rooms here,” she said.