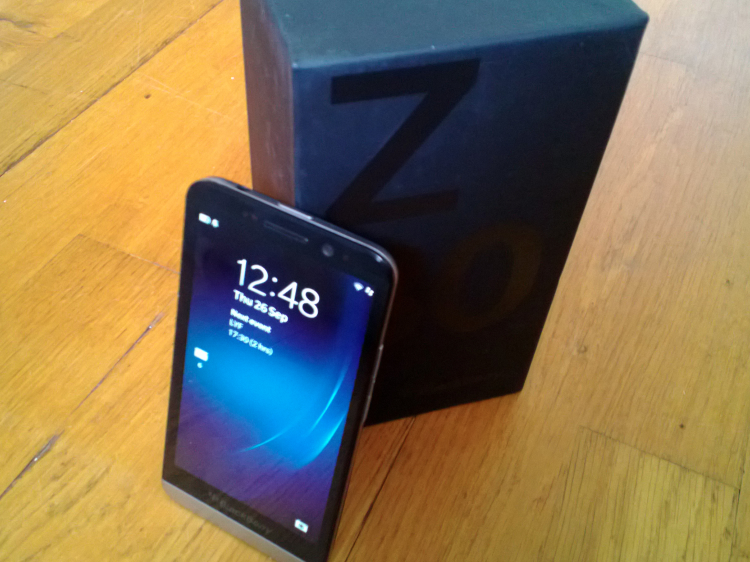 The Z30, BlackBerry’s fourth smartphone based around the BB10 operating, was announced last week by the Canadian company, and I’ve spent time this week with the 5 inch touchscreen handset to see what BlackBerry can offer in this ‘second generation’ handset.

Last week also saw a few other announcements from BlackBerry, ranging from extensive job losses to a bid that would take the company back into private ownership. These are all going to have an impact on the Z30, but I’m going to address them in a more detailed article in the near future. Right now I just want to look at the Z30 ahead of its availability in the UK tomorrow.

Out of the box two things struck me. The first is that they’ve got the presentation sorted. A matt black box, with the Z30 proudly on the top tray. Below that a cardboard sleeve for the flip cover, and then the USB cables, AC charger, and in-ear headphones in the lower level. It all feels rather slick, professional, and gives a great first impression.

And then I found the spare battery. Because the Z30 is a sealed unit, this is an external battery pack for recharging the handset through the micro USB port. It’s one way to get around the short battery life that the Z10 suffered. The other way is to put a really big battery cell inside the handset, which they’ve done. With a 2880 mAh battery, the Z30 has a lot of power.

But that power does come with some caveats. The first is that much of the extra capacity is going to be used by the larger 5 inch capacitive touch-screen (now using Super AMOLED, rather than the LCD technology of the Z10), while the second is that the BB10 OS does not seem to be as efficient as other mobile operating systems. I’ll be watching the battery life as I review the handset and cover this more in the main review next week here on Forbes. BlackBerry has stated the Z30 will run for 25 hours with ‘varied use’.

Spec wise the handset is powered by a 1.7 GHz Snapdragon S4 Pro CPU, an Adreno 320 GPU, and 2 GB or RAM, which is a similar load out to the middle-high end Android smartphones this handset will be in direct competition with. BlackBerry is also pushing the ‘natural sound’ capabilities of the device, with stereo speakers and improved audio handling for media playback and video calling.

The other notable change in the Z30 (apart from the general scaling up of the size and specs) is the OS. The Z30 comes with v10.2 of the BB10 operating system. As a point change there’s nothing fundamentally new about the use or operation of the handset from the Z10, Q10, and Q5 that we’ve looked at previously. You still have the fascination with gestures replacing the home keys and status bars of other handsets, you still have the glance functionality to look at incoming messages over a number of social networks, services, and email boxes, you still have access to BBM, and the third party application support is still patchy.

Visible highlights of the 10.2 update can be seen in a number of places, but given the focus on messaging in the handset, the addition of the ‘Priority Hub’ is one to draw attention to. Over time, the Z30 will learn what messages are important to you, and will endeavour to highlight these so you can have quick access to them. With the potential avalanche of messages from Twitter, Facebook, LinkedIn, and other sources, this could prove useful to the busy Z30 user.

You can also reply to incoming messages without going to them through the hub. Receive a message alert across the top of the screen when you are working, and a quick swipe gesture down and you have the option to reply to the message from that screen. A nice touch, and one of many that have been added since the Z10 to help with your workflow around communications.

From this short time, the Z30 takes many lessons from the Z10 and the BlackBerry team has applied these to make the core experience of BB10.2 one that fits better with the connected experience of 2013, although I still think that being limited to a single Twitter account, and a lack of Facebook Pages inclusion in the hub, stops BB10 overall being anything other than a consumer focused OS, which is unfortunate given the focus on the prosumer that BlackBerry is now pushing for.

Putting the new handset next to the older Z10, and you can see that the Z30 is a clear improvement. The physical styling of the handset is more welcoming and is a better fit in my hand; the increased screen size blends in to the front of the handset and the extra size takes away the cramped feeling of BB10 that hindered the first all-touchscreen  on the Z10 (and show just how poorly suited a physical keyboard is to the new OS).

But being better than the last handset is not enough. The Z30 is going to be placed alongside handsets like the Samsung Galaxy S4, the iPhone 5S, and the Nokia Lumia 925/928. My gut feeling is that while the Z30 handles the basics well, it will struggle when you push the envelope.

So for the next week I’ll be living with the BlackBerry Z30 to see how well you can push the envelope with the handset, both as it stands now, and if all of BlackBerry’s online services were to be switched off. There’s a strong chance that this could be the last new handset from BlackBerry, and if that is the case I hope they can go out with their head held high.

There is a market for the Z30, but I don’t think it’s as large as BlackBerry hope. In an unbiased world many people would happily consider the Z30 in-store, but I don’t see it being an immediate ‘must buy’, more like a handset that needs careful consideration.  That means the business issues around BlackBerry are going to come into the decision process, and that will make the Z30 an interesting purchase to justify.

BlackBerry ‘Disappointed’ in Results as It Pursues Sale