How does Google's self-driving car work – and when can we drive one?
Advertisement 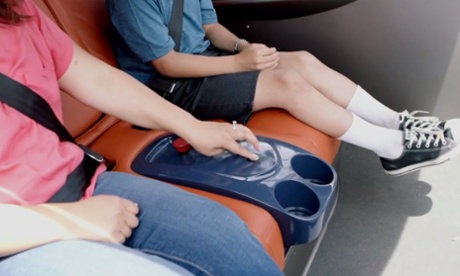 Self-driving car prototype has no steering wheel, brake or accelerator pedals. So how safe is it, and what is it like on the road?

Google unveiled a brand new self-driving car prototype on Tuesday; the first company to build a car with no a steering wheel, accelerator or brake pedal.

The car’s arrival marks the next stage in Google’s self-driving car project, which was born from the Darpa Grand Challenges for robotic vehicles in the early 2000s. Google kickstarted its own self-driving car project in 2008, and it has been rumbling on ever since, first with modified Toyota Prius and then with customised Lexus SUVs, which took the car’s existing sensors, such as the cruise-control cameras, and added a spinning laser scanner on the top.

It is the first truly driverless electric car prototype built by Google to test the next stage of its five-year-old self-driving car project. It looks like a cross between a Smart car and a Nissan Micra, with two seats and room enough for a small amount of luggage.

It is the first real physical incarnation of Google’s vision of what a self-driving car of the near future could be.

It operates in and around California, primarily around the Mountain View area where Google has its headquarters.

What does it do?

It ferries two people from one place to another without any user interaction. The car is summoned by a smartphone for pick up at the user’s location with the destination set. There is no steering wheel or manual control, simply a start button and a big red emergency stop button. In front of the passengers there is a small screen showing the weather, the current speed and a small countdown animation to launch.

Once the journey is done, the small screen displays a message to remind you to take your personal belongings – reinforcing that this is not aiming to be a substitute for your personal car at the moment, but more as a replacement for the taxi without the human driver.

Very few people outside of Google have been allowed to ride in the new car. Most of the people depicted in Google’s promotional videos for the new car described the experience as “smooth” and “nothing that feels the least bit threatening”.

Kara Swisher and Liz Gannes from technology site Recode were one of the few independent test riders, who described the car as having “ample” room despite being small, likely due to the lack of the normal controls taking up space in the cabin, and “that this felt a lot like a theme park ride”.

Google has designed the car from scratch, starting with the sensors and a frame to interconnect them, then adding a cabin that does not block any of the sensors or create blind spots and eventually the body shell. The manufacturing of the 100 or so prototype cars will be done by a firm in the Detroit area, but Google declined to comment on which.

How does it work?

Powered by an electric motor with around a 100 mile range, the car uses a combination of sensors and software to locate itself in the real world combined with highly accurate digital maps. A GPS is used, just like the satellite navigation systems in most cars, to get a rough location of the car, at which point radar, lasers and cameras take over to monitor the world around the car, 360-degrees.

The software can recognise objects, people, cars, road marking, signs and traffic lights, obeying the rules of the road and allowing for multiple unpredictable hazards, including cyclists. It can even detect road works and safely navigate around them.

The new prototype has more sensors fitted to it that can see further (up to 600 feet in all directions) and in greater detail than the ones available on the previous repurposed Lexus and Toyota vehicles.

How safe is it?

The new car is the next evolution of Google’s self-driving car. While the new frame is untested, the company’s previous versions have clocked up over 700,000 miles of testing on public roads, mainly around California, including over 1,000 miles of driving in the most complex situations and cities like San Francisco’s hills and busy streets.

The car itself is limited to 25 mph, which restricts it to certain roads, but also minimises the kinetic energy it could carry into a crash if one should happen. The front of the car is also made to be as kind to pedestrians as possible with a foam bumper and a flexible windscreen that is designed to absorb energy from an impact with a person’s body.

Seat belts are also provided – a safety requirement for vehicles on the road – while the car has redundant systems, a “fault-tolerant architecture” as Google calls it, for both steering and braking, should the primary systems fails; plus that emergency stop button that passengers can hit at any time.

Google has also taken the data and behaviours it learned from its previous vehicles to create a defensive, considerate driving style that is meant to protect both the passengers and other road users. For instance, the car will wait a second after the traffic lights turn green before it moves off, although this could incur the anger of drivers stuck behind it.

Google also says that making it drive in a natural and predictable way has been one of the key goals, so that it behaves in a familiar way on the road for other drivers.

Google says it has gone as far as it can with the current customised vehicles and that a new platform is needed to take the project and technology to the next step and closer to a product people can actually use.

For instance, the previous generation Lexus vehicle had blind spots right up against the car where the sensors couldn’t see, something that needs to be eliminated in any vehicle open to the public.

The cars will first be used to test the software driving the car and push its capabilities. Google says at some point, when it deems its software safe, it will start putting real people into the cars beyond Google engineers. It will use the cars in a similar manner to the company’s Google Glass explorer programme, analysing how people use them and what works and what doesn’t.

Why do damn cute?

The car’s cute looks and friendly “face” were created intentionally to be “very Googley” according to its designers, to put both other road users and passengers at ease with the new technology. The shell is also designed to give the sensors the best view of the surroundings.

Why does it still look like a car on the inside?

The new car has two traditional car seats, primarily because in this iteration passengers have to be strapped in like they would in any other car to meet safety regulations, which means using standard seat belts. It also provides a more familiar passenger experience, which at this stage is likely important to aid adoption.

Is this something I’m going to be able to buy?

Google’s vision for this kind of self-driving car isn’t an exact replacement for the one parked outside your home. They are designed to be more like shared vehicles, possibly within a family or more likely as a replacement for taxis.

These cars are still very much in the early prototype stage still, and Google is still trying to figure out how to make a product out of the technology, how much it is likely to cost and when it will be available.

Apparently it will not have ads according to Google, although whether it’ll eventually have a small screen like some taxis now that plays video adverts, who knows. That will likely be up to the operator rather than Google.

Who will build it for me?

Google is proving the technology, but it is unlikely to make the cars for sale once that technology is ready for the mass market. It has said in the past that it is actively seeking car manufacturing partners, which means we could see a Toyota, Ford or Fiat-made Google car in the future, but that is all very much still up in the air.

When can I get one?

Google says the cars should be road-ready by early next year, but that testing would take more than two years. At that point the technology will be ready for the next stage, which is likely to be greater pilot testing.

Current expectations are that these self-driving cars are at least five years away from being mature enough to create a real, non-prototype product, but it may be far longer until you can buy or hire one for personal use.

One of the biggest hold-ups to the progression of the technology onto the open road of Britain, the US, Australia and the rest of the world will be legislation.

However, there is still much to work out, primarily revolving around what a passenger in a self-driving car and can’t do – will they have to be able to take control at any moment, for instance – as well as questions around what happens when an accident happens, who is at fault and who pays.