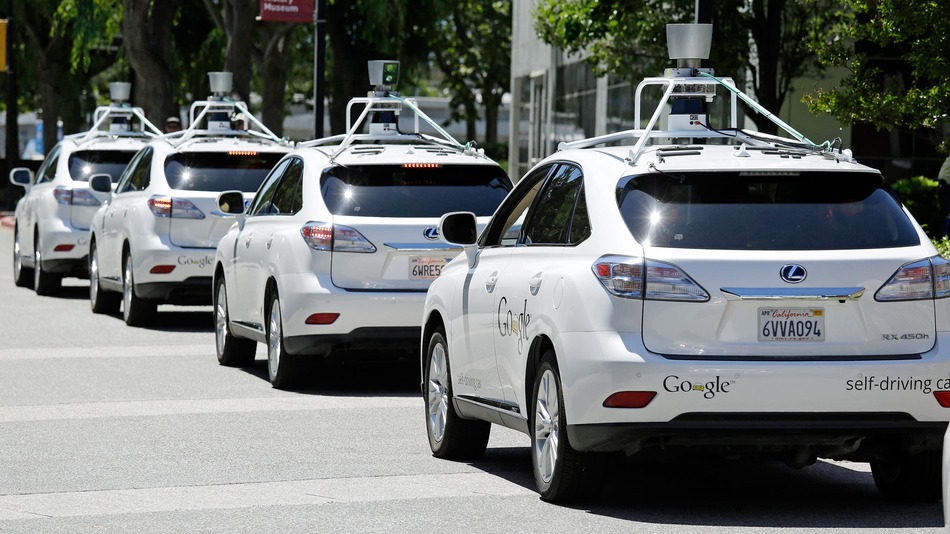 Here’s a recent prediction from Cisco’s technology trend watchers: In 5 to 7 years, it’ll cost us more to drive our cars than to let them drive us.

At a moment when Google dominates the conversation in key auto tech sectors — capturing attention in May as it demonstrated its cars’ latest driverless acumen, in terms of mapping, sensing and responding — two reasonable questions emerge: How would driverless cars cost us less to use, and how close are we to commercially available models on our roads?

“Considering that not only Google, but also automakers, such as Nissan, Audi and Toyota, are intensifying their efforts to develop advanced autonomous-driving technology, it’s safe to say that driverless cars could go mainstream in about 10 to 15 years,” said Jordan Perch, an analyst and writer for DMV.com. “Google is confident that it will be able to launch a self-driving car by 2025, and Nissan is even more optimistic, saying that it will bring an autonomous car to the market by 2020.”

And what can we say about the concept that driverless cars will be less expensive, somehow, than what it currently costs — in numerous ways — to drive ourselves around? On that point, we turn to experts, many of whom are already considering the prices we could pay when our wheels become driverless.

“It’s a best-case scenario, from a technology perspective, but possible,” said Chunka Mui, managing director of The Devil’s Advocate Group, and author of The New Killer Apps, regarding Cisco’s 5-to-7-year prediction surrounding the cost advantages of driverless cars. “There are two types of cost to consider: the cost of accidents and the cost of operation.”

The first set leads quickly into considerations of not only medical bills and insurance claims but also ethics and decision-making — that is, costs that come to us on a wholly different level.

On the first point, says Mui, “In the U.S. alone, we estimate that vehicular accidents inflict about $450 billion in annual costs.

According to Ravi Pandit, an automotive-engineering expert who is the chairman and group CEO of KPIT Technologies, if the human-driving equation were eliminated from the vehicle-safety scenario, insurance companies could create additional incentives for what would then be vehicle passengers/owners.

“When autonomous vehicles are proven safe for roads, at scale, insurance companies will pass on significant rewards to those using such a vehicle,” Pandit said. “Even today, many insurers will pass on savings if the vehicle owners allow access to driving parameters such as speed, location, time and acceleration/deceleration patterns.”

Granted, there’s plenty of research still to come before we can assert for certain what “proven safe” means — and at what scale, in fact, humans will begin to feel right about taking their hands off the wheel for good.

Alex Hern, writing for The Guardian, raises a separate quandary having to do with the philosophical costs we may be readying ourselves to pay when it comes to the in-car CPUs of the future. What should coders tell driverless cars to do in scenarios that are no-win situations? In other words, if an accident were unavoidable, into what — or whom — should a driverless car be programmed to crash? Swerve into children, swerve into adults, or what?

As Hern quotes Patrick Lin, director of the Ethics and Emerging Sciences Group at California Polytechnic State University, in his article, “it’s the difference between premeditated murder and involuntary manslaughter.”

On a less unpleasant level, Hern comes back to basics of a different kind: If our cities begin to fill with autonomous cars that can simply pick up passengers and take them from here to there, then, “in that world,” he asked, “why does anyone need to own a car at all?”

The consultancy IHS predicts that by 2025, there could be 230,000 driverless autos out there on the roads. By 2035, perhaps up to 12 million. In that future, perhaps one day we’ll experience the metropolitan fleet, happily whisking us to and fro. But in the beginning, it’s almost certainly the case that we’ll be plunking down cash for our self-driving cars. That, experts say, could be at considerable expense indeed.

“They could cost as much as $10,000 more than what the average conventional car costs today,” said Perch. “One could argue that this is a conservative projection, considering that the equipment that is implemented in Google’s self-driving cars costs more than $250,000 — although this figure should drop significantly as the company develops its autonomous-driving technology further.

“This is why self-driving cars are more likely to be popular among the wealthier consumers,” he continued, “whereas people with average income levels will not be able to afford one for a long time.”

Still, a tipping point for consumers could arrive when they begin to realize how deeply driverless technology can impact the cost of operating a vehicle in the first place.

The savings could add up quickly, especially if conventions around ownership begin to shift.

The savings could add up quickly, especially if conventions around ownership begin to shift.Here’s one model. Fixed annual ownership costs for the average U.S. passenger vehicle start at approximately $8,700, according to Andreas Mai, director of Smart Connected Vehicles for Cisco. In this model, a driverless car — in part due to its ability to communicate with other smart and connected cars on the road, driverless or not, as connected-car tech presumably becomes more commonplace — would help eliminate some 80% of human-caused crashes involving that vehicle. According to Mai, as an average based on AAA, Texas A&M Transportation Institute and DOT numbers — encompassing all U.S. passenger vehicles — that kind of reduction could create some $1,800 in accident-related savings for our owners. So, now the average annual operating cost is roughly $6,900. Then we look at how the very concept of ownership might change.

“Conventional vehicles are used less than 5% of their usable time,” Mai said. “The convenience of being able to call an autonomous vehicle when it is needed and easily release it for others to use when it is not needed is likely to make autonomous-car sharing a much more convenient and cost-efficient mode of transportation for many. Assuming the remaining average ownership cost ($6,900) can be shared by three users, this would equate to additional savings.”

In other words, now you’re into the operation of an autonomous car for $2,300 per year, on average, or just about 25% of what you’d spend to operate a human-driver vehicle. Would 75% savings be a tipping point for the consumer? All other factors aside, at this rate you’d pay back a $10,000 premium on a driverless car in your second year of shared ownership (at an average of $4,600 savings per owner), or in your sixth year if you owned it alone (saving, on average, $1,800 annually).

See also: 14 Robotics Breakthroughs From the Past Decade

Bringing autonomous cars to market and integrating them with the world in which we drive are two different things, however. Cisco, considering a model in which dedicated lanes and exclusive city sectors accommodate just driverless vehicles, estimates they could be out there as early as 2015 to 2019 (bringing us those operating savings within five years). Mixing driverless with human-operated cars pushes the timeframe out to something more in line with Perch’s estimates.

Meanwhile, tipping points, whatever they might be for the consumer, probably won’t prevent passengers from sitting in a driverless car now and then if commercial fleets take on the technology faster than the individual.

When Columbia University researchers crunched numbers — considering the possible cost of a driverless taxi, per mile, versus the cabbie-piloted versions we know now — it came out with a significant savings projection. For example, given a robot fleet of Manhattan taxis, The New York Times reported, the cost per trip-mile of your future ride could drop from $4 per to about 50 cents per trip-mile.

For some, that’s already reason enough to keep the meter running on next steps for driverless cars.