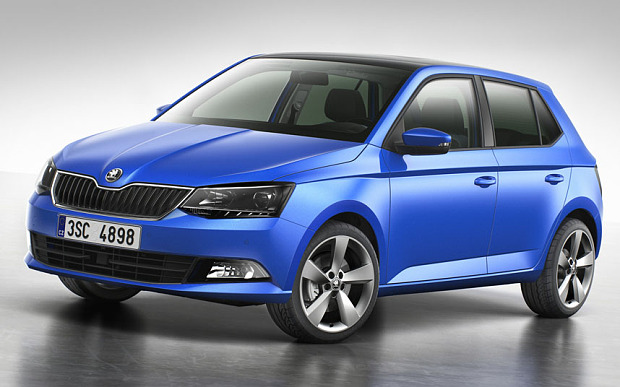 Skoda has revealed the first details and images of its new Fabia.

The third generation of the popular supermini will feature crisper, sharper lines than the current car, and will also be more conventional in its dimensions.

Where the outgoing Fabia is taller and narrower than many superminis, the new model will feature a 30mm lower roofline, and will be 90mm wider.

Skoda hopes that this will give the new Fabia better-balanced proportions and make its styling more appealing to younger buyers; to that end, the company has also involved its Motorsport arm in the design process.

Despite the sportier looks, the new Fabia will be considerably more efficient than its predecessor; Skoda is claiming a reduction in fuel consumption of up to 17 per cent, depending on the engine. That’s thanks in large part to the lighter weight of the new Fabia; Skoda says the new car will weigh as much as 65kg less than the outgoing Fabia.

The new Fabia’s engine range will consist of four petrol and three diesel options. The entry-level petrol will be the same 59bhp 1.0-litre three-cylinder as is found under the bonnet of the smaller Skoda Citigo.

There’ll be another 1.0-litre petrol with slightly more power, and two 1.2-litre four-cylinder turbocharged petrol engines, the most powerful of which will produce 109bhp. The diesel engine options, meanwhile, will all be 1.4-litre turbocharged units, varying in power from 74bhp to 103bhp.

A low-emission Greenline version of the Fabia won’t be available when it’s launched, but will join the range later in 2015, featuring the 74bhp diesel engine, along with a start-stop system, kinetic energy recuperation, and tyres with a low rolling resistance. Skoda is promising that this model will be able to achieve fuel consumption of 76mpg, along with carbon dioxide emissions of 82g/km.

Production of the new Fabia will start at the end of August, with the official debut to take place at the Paris Motor Show in October.