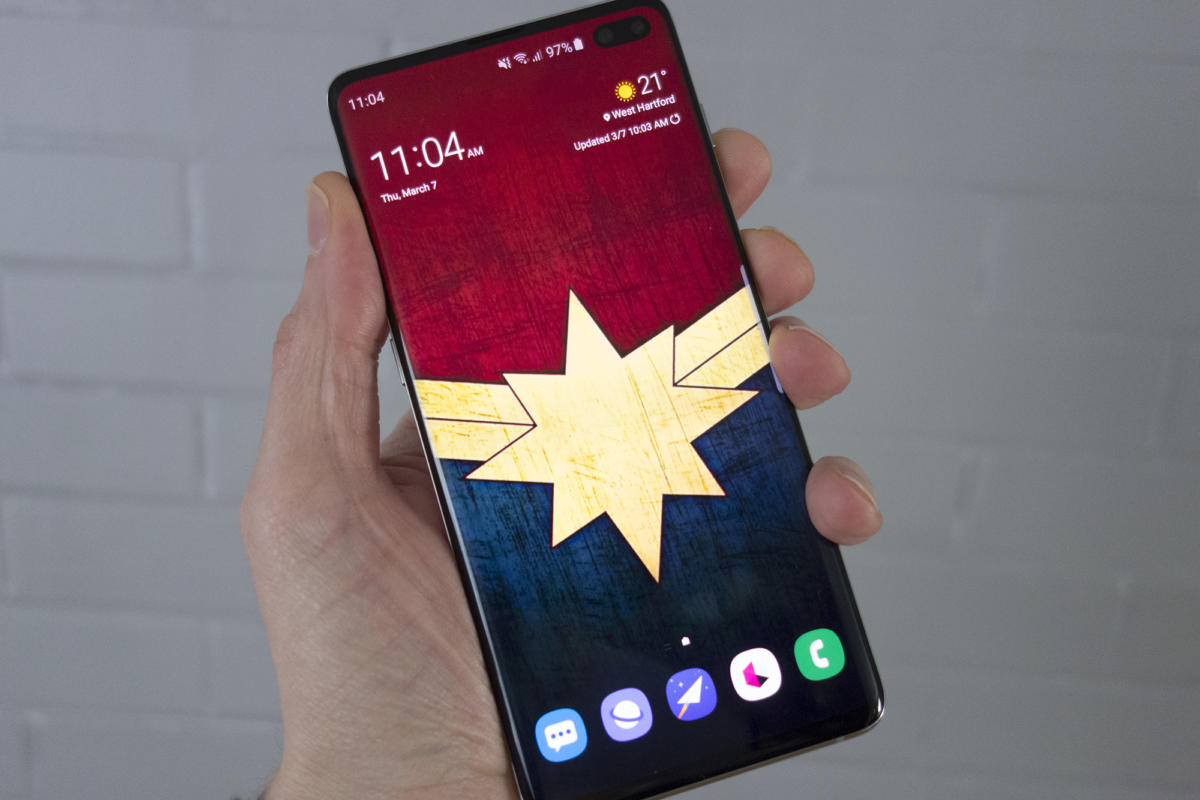 The Galaxy S10 5G is the largest, most advanced and most expensive smartphone in Samsung’s current lineup, aimed not just at being “the 5Gone” but also the best one.

Unlike the OnePlus 7 Pro, which comes in either 4G or 5G versions that are identical in size, weight and features, the S10 5G is its own phone. It’s bigger, heavier, thicker and has more cameras and sensors on the back and front than the S10+.

The front is filled by the 6.7in QHD+ AMOLED screen, which curves at the sides and has an large oval-shaped cut out in the top right of the display for two selfie cameras and a depth sensor.

The screen is really lovely, as you’d expect for a top Samsung: bright, crisp and colourful with good viewing angles. It is not quite as bright or smooth as the fantastic 90Hz screen on the OnePlus 7 Pro, but better than all the rest.

The massive screen means the S10 5G is a very big phone. At 77.1mm wide and 162.6mm tall the S10 5G compares similarly to 5G rivals such the OnePlus 7 Pro or the 4G-only iPhone XS Max. But the way the back tapers at the sides and its comparatively light 198g weight, which undercuts the competition by 8-10g, makes the S10 5G just about manageable. I could fit it in a men’s jeans pocket, but anything smaller was a struggle.

If you don’t want the biggest of phones and the downsides of weight, cost, size, one-handed use, etc that come with them, this is most definitely not for you.

The display hides Samsung’s ultrasonic fingerprint scanner for unlocking the phone with your thumb on the screen, which works well enough but isn’t as fast or accurate as the optical sensor on the OnePlus 7 Pro 5G or traditional fingerprint sensors.

The phone is water resistant to the international IP68standard, or depths of up to 1.5 metres in fresh water for 30 minutes. Drop the S10 5G in the toilet and you’ll be able to rinse it afterwards. It also has a headphone socket, which is rare in 2019.

The Galaxy S10 5G has the same processor, memory and storage as most of the other Galaxy S10 versions and therefore performs similarly. In this US this means Qualcomm’s Snapdragon 855 processor, but in the UK, Europe and many other regions it means Samsung’s own Exynos 9820, as tested here.

It’s a fast-feeling phone, if not quite the fastest, and will handle most of what you can throw at it. Games and augmented reality experiences, which are being pushed hard with 5G, were smooth but made the phone heat up quite a bit.

The S10 5G has the largest battery in Samsung’s S10 phone line and so lasts the longest at 36 hours between charges. With the screen set to default FHD+resolutionand the always-on display (AOD) setting off, the phone made it from 7am on day one until 7pm on day two with fairly heavy usage, mainly on 4G with bursts on Vodafone’s new 5G network where available in London.

The S10 5G is also faster charging than Samsung’s other phones with a 25W charger included in the box. It hit 90% in an hour, which is still not the fastest charging phone but is a significant improvement over other Samsung devices. Wireless charging at up to 15W with a Qi charging matt works well, as does wireless power sharing charging something else from the back of the S10 5G such as Samsung’s Galaxy Buds.

But the S10 5G’s 4G performance on Vodafone’s network was poor, spending a significant amount of time dropping down to 3G in areas where a OnePlus 7 Pro and Huawei P30 Pro had strong 4G signal on the same Vodafone 4G network. The issue was particularly problematic on public transport.

This poor performance gave rise to further testing which revealed that the poor signal performance on Vodafone’s 4G network wasn’t isolated to Samsung’s new 5G phone – but also its regular 4G phones including the Galaxy S10. The 4G-only phones had a slight advantage of around half a bar of signal strength over their 5G counterparts on the same network.

However, when the Samsung phones dropped down to 3G their internet connection effectively became unusable causing everything from web pages and apps, to messages and even email, to time out. But it’s worse than simply being offline, as the phone thinks it has a working internet connection, leading to an extremely frustrating scenario where the phone continually tries over and over to perform the task you’ve set it before timing out after a minute or so.

To be clear, Samsung’s S10, S10+ and S10e performed the same as the OnePlus 7 Pro and Huawei P30 Pro (two of the best for network performance) on both EE and Three’s 4G network in and around London and the south of England. The problem appeared only to be on Vodafone. But neither Vodafone nor Samsung could explain the signal issues faced by the Samsung S10 5G and other S10 smartphones.

A Vodafone spokesperson said: “We’ve recalled the device and SIM for internal testing. We would welcome the opportunity to walk around with the Guardian in the areas they have visited to better understand the user experience found so as we can better understand any issues and implement improvements or fixes.”

A Samsung spokesperson declined to address the 4G problem and instead said: “The 5G user experience is only going to get better as 5G network coverage improves and expands. Samsung is working closely with our partners to provide updates to the device so that consumers can get the best network performance.”

The Galaxy S10 5G runs Samsung’s new One UI version of Android 9 Pie, which is the same as the other S10 variants.

One UI is a big upgrade over previous versions of Samsung’s software, refocused around making phones with large screens more usable, which was useful here. The top of the screen is generally for information display, while the bits you have to touch have been moved towards the bottom.

The only thing that hasn’t aged well are Samsung’s gesture navigation options, which replace the traditional three-key navigation bar at the bottom of the screen with swipe pads where the buttons would be. It’s not a fluid experience and is difficult to use one-handed on this size of screen.

While more beneficial for the larger Galaxy S10+, the S10 still benefits from generally having the top half of the phone for viewing information and the bottom half for touch-based interactions. Rival systems such as that used by OnePlus, Huawei or even Google’s upcoming Android Q are far better.

The Galaxy S10 5G has the same three regular cameras on the back as the S10 and S10+ but adds a 3D depth camera for good measure.

That means you get a main 12-megapixel camera, 12-megapixel telephoto camera and a 16-megapixel ultra-wide angle camera providing zoom from 0.5 to 2x, and then on to a 10x hybrid zoom.

There didn’t appear to be much difference between the cameras on the S10 5G and S10/S10+. It produced some excellent photos in good light, with solid but not class-leading low-light performance, despite the new night mode.

Video capture was very good, arguably better than many rivals, with fun depth effects using the extra sensors on the S10 5G. The selfie camera is the same as the S10+, which is excellent.

Overall, the camera on the S10 5G is good, but falls short of the best from Huawei.

The Samsung Galaxy S10 5G costs £1,099 in crown silver or majestic black on either EE or Vodafone. So far, the phone is not available to buy standalone and SIM-free in the UK.

The Galaxy S10 5G has all thehallmarks of a range-topping Samsung. A big, bright screen, sleek design, solid performance and excellent battery life – the best of any of Samsung’s S10 variants.

The rear camera is also very good and Samsung’s One UI is great, as long as you’re happy using navigation buttons as the swipe gestures are hard to use on this size of phone. It is massive and expensive, meaning only big-phone lovers are going to want to even try and use it.

Its 5G performance is solid on Vodafone’s new 5G network. But the poor 4G performance on Vodafone of the S10 5G and its smaller S10 siblings, which neither the network nor Samsung have managed to explain, mean I strongly recommend not buying any top-end Samsung phone on Vodafone.

It may not quite be the best 5G experience available at the moment – that’s the OnePlus 7 Pro 5G – but it’s close run thing. And where the OnePlus is an EE exclusive in the UK, the S10 5G is available on a wider range of mobile networks.

The S10 5G is the biggest and best Samsung you can buy, at least until the recently launched Note 10 arrives in stores, which could take the crown.