SSD or HDD For Laptop, Which Is Better?
Advertisement 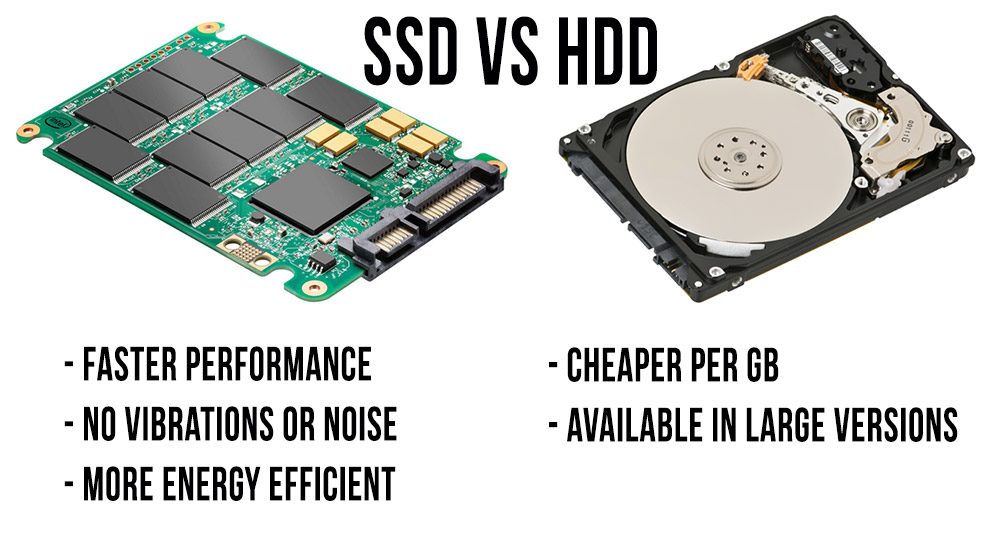 There are those times you might come across a great laptop where you have to pick between a 256 GB SSD or 1 TB HDD.

For some, this might be an easy choice but for others, it’s the opposite. Especially if has a 256 GB SSD and 1 TB HDD. You then start to wonder which one is better leading to a whole lot of things.

It doesn’t have to be to be a difficult choice. At the end of this article. You will know which is better – SSD or HDD in laptop.

Their differences, lifespan, reliability and their impact on performance. So that next time you won’t spend so much time on such a decision.

Or you could get a laptop which has an SSD or HDD combo which will basically solve all your problems concerning storage.

Flash controller and NAND memory chips are the two important components in the circuits that make up the SSD. Because of their electrical circuits, SSDs are known to be the fastest amongst storage devices in computers.

Hard Disk Drives (HDDs) on the other hand depend on rapidly rotating disks that have a magnetic surface. A moving actuator arm moves to read and write data on the rotating disks.

Hard Disk Drives have moving mechanical parts, unlike solid state drives that are completely devoid of moving parts. On top of that, HDDs take up more space and make a lot of noise when they are working.

Basically, solid state drives are the fastest when compared to solid-state hybrid drives (SSHD) and hard disk drives (HDD). As an example, the Samsung 850 Pro has a read and write speed of 550 MB and 520 MB respectively.

A solid-state drive is advantageous because it provides a massive boost to performance. Not all SSDs are the same and read and write speeds certainly will differ amongst them. PCIe NVMe solid state drives are the fastest amongst the other types – PCIe, SATA, mini-SATA, M.2 and NVMe.

If data needs to be written or read the hard disk, the mechanical arm moves onto the spinning plate. It then has to wait for the intended spot to pass under it before it can start the read/write process.

SSD Vs HDD Lifespan And Reliability

This is what most people are worried about. Which one is more reliable and how long does each last?

Moving parts are absent in solid state drives because of their integrated circuitry. The absence of moving parts make solid-state drives less susceptible to falls, shocks and bumps. Also, there isn’t any wear and tear caused by friction of the moving parts.

The number one enemy of solid state drives is water. Water is the enemy to anything that has an electrical circuit. It short circuits the solid state drive. Make sure to keep water away from your laptop.

Hard disk drives have moving parts and are more susceptible to shocks, falls and bumps. In addition, they suffer from wear and tear just like all moving mechanical parts. But, with the technology available hard drives are now shock-proof designed to withstand physical impact. And, the wear and tear which is not much of a big deal.

For those thinking magnets can wipe your data that was back in the day. Now, magnets have basically no effect on hard disk drives because the magnets that control read/write heads are strong magnets.

No need to freak out if a magnet comes into contact with your laptop. It takes a very strong magnet to have an effect on hard disk drives.

The lifespan of an SSD depends on two factors: how well you take care of it and the limited amount of reading/write cycles. The first one is pretty self-explanatory.

Most SSDs have an average life expectancy of five years or more depending on how you use. Most of us normally change laptops every three to five years and so the lifespan shouldn’t be a big deal.

The main problem is data recovery. Data recovery is much more difficult and time-consuming because of its integrated circuitry. Always back-up your data.

All things being equal, hard disk drives have an advantage over solid state drives when it comes to lifespan. First of all, they do not have a limited read/write cycles. They will continue to store information if they platters are able to spin. Secondly, data can be recovered easily.

As stated earlier, lifespan is not really important because the average consumer changes laptops every three to five years and most at times it’s not because of the storage devices but rather performance and reducing battery life.

The only time you should be worried about lifespan is if you plan on using it as an external drive or for enterprise purposes.

Because of high read/write speeds of solid state drives offers a massive boost to performance in laptops.

It basically transfers to everything you do on a laptop. SSDs also use less power and noise. There are some fast HDDs but not as fast as SSDs.
SSDs give you top computing performance if you are able to afford it. Solid state drives cost more than hard disk drives.

A 256 GB SSD costs an average of $50 whiles a 1 TB hard disk drive also costs the same. The larger the storage capacity of an SSD the more expensive it is.

Also, the type of SSD also affects the price. PCIe NVMe and Intel Optane SSDs are the most expensive and also have the fastest performance.

HDDs are a lot cheaper and come with massive storage space. Basically, laptops that have HDDs are much more affordable than SSDs. Also, the same model laptop but with a 1 TB HDD is going to cost the same if it has a 256 GB SSD.

In short, SSDs are better performance than HDDs.

Can A Laptop Have Both HDD And SSD?

Yes, a laptop can have both HDD and SSD. But for that to happen it should have an HDD bay and SSD slot for installation.

Which One Should You Get, SSD Or HDD For Laptop?

SSDs or HDDs which one should you get when buying a laptop? If you have the money and prefer speed over storage, by all means, go for a laptop with an SSD.

Keep in mind that the more storage the SSD has in a laptop the more your bank account shrinks. Expensive and high-end laptops already have a high performing SSD as a storage device.

If you favour storage space over speed and on a budget HDDs are a great option. Cheaper laptops are mostly equipped with HDDs. There are some laptops that have SSDs in the budget category but mostly have a storage space of 128 GB or 256 GB like the Acer Aspire E15.

Some laptops have both SSDs and HDDs for storage. SSD and HDD combos give the best of both worlds. Fast read/write speed and a lot of storage.

The operating system, games and important applications are kept on the SSD so as you can benefit from fast boot times and loading. Other files and applications that are not opened often can be stored on the HDD to make use of its storage.