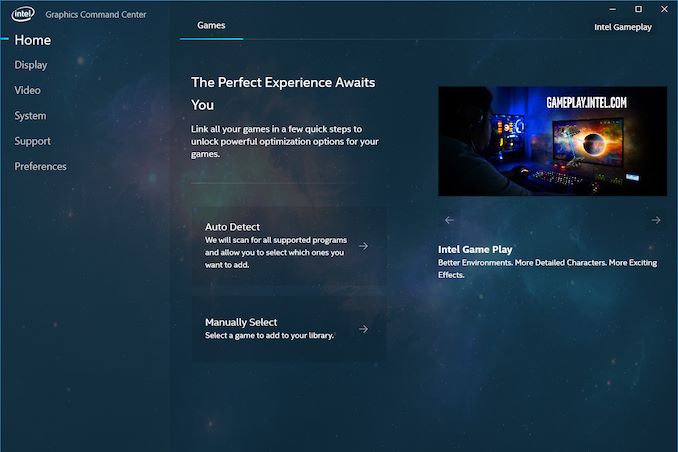 Intel didn’t announce any graphics cards at GDC 2019, but the company has announced yet another platform in preparation for them as well as its incoming family of 9th Generation mobile processors.

Initially the Graphics Command Center will only support integrated Intel graphics inside the brand’s processors – with the exception of Intel’s new KF-series CPUs, of course – because it’s the only type of graphics Intel currently offers. IGCC will also only support Intel processors that are at least 6th Generation Skylake or newer.

However, considering how few users play games with integrated graphics only, we suspect Intel is laying the ground work for future Intel Graphics Cards as well as the company’s highly anticipated Gen11 graphics, which are said to give iGPUs a real shot in the arm.

The Intel Graphics Command Center is now available in an early access state to all users and you can download it here.

Intel also used some of its time on the GDC 2019 main stage to introduce new 9th Generation mobile processors for laptops – though without naming any specific chips.

Aside from that, Intel hasn’t shared any in-depth details about its new 9th Generation mobile lineup, but we can at least infer that these CPUs will be built from yet another iteration of the company’s 14nm+ process as Coffee Lake Refresh and Basin Falls Refresh processors.

Earlier last month, Intel spilled the beans on its whole 9th Generation Mobile family of mobile processors and they are as follows.

Bear in mind that none of these models or their exact specifications have been announced officially yet, so treat this chart above as early conjecture for now. Intel has told us it plans on launch its new 9th Generation H-series CPUs in Q2 2019 (so sometime in April, May and June).

Moto Mods aren’t dead yet, if this Moto Z4 leak is to be believed