Motorola Razr rumors: Everything known about the foldable phone so far
Advertisement 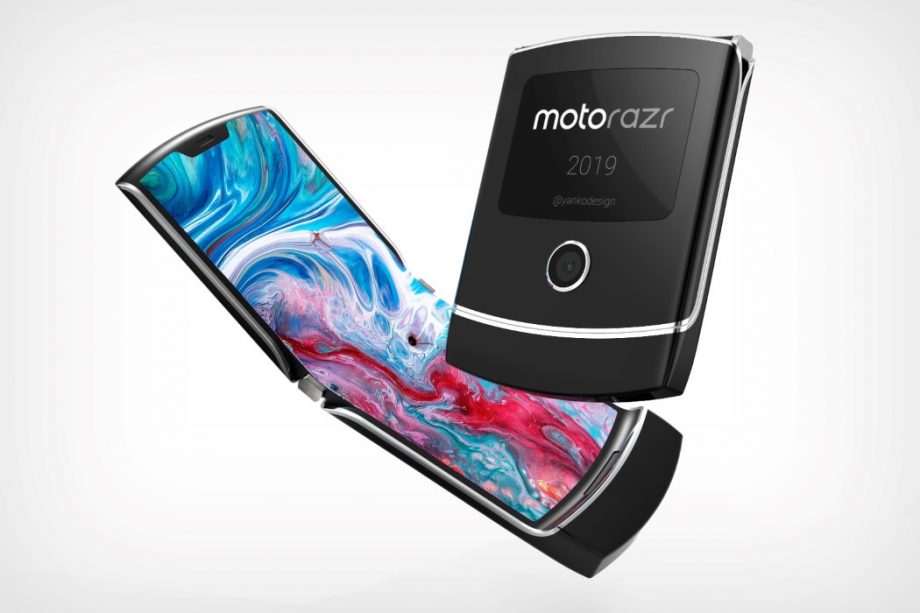 The latest photo leak gives us a clear picture of the Motorola Razr foldable phone. Evan Blass, a well-known leaker of upcoming phones, shared images on his private Twitter account showing pictures of what is likely the Moto Razr folding phone. The images show what looks like a Moto Razr V3 but instead of a small screen and keypad, there is a long display that spans the entire phone and folds in half. When closed, images show the phone’s front screen being used to frame a selfie and replying to a text message.

These new photos come just a month after Motorola verified that it would be launching a foldable phone by the end of 2019. This lines up with earlier rumors from Dutch site Let’s Go Digital that said the upcoming Moto Razr foldable phone would launch in the US “within the next few months” and in Europe in December. Hype and rumors that Motorola is revamping its iconic Razr flip phone have been circulating since January, and have continued throughout the year.

The foldable phone race has been one filled with delays with other phone makers like Samsung and Huawei postponingthe launches of their folding phones. Interestingly enough, the latest Moto Razr news comes on the same day that the Samsung Galaxy Fold went on sale in the US.

At the beginning of September, Bloomberg reported that Samsung is working on a second foldable phone to follow the Galaxy Fold, and like the upcoming Moto Razr, it will fold down into a pocketable size. It’s also speculated that the Motorola Razr won’t be as powerful and high-end as other foldable phones like the Galaxy Fold and Huawei Mate X, but there are a lot of reasons to be excited about a Moto Razr foldable phone.

A foldable screen would breathe new life into the classic phone’s form-factor. Instead of there being a small screen and physical dial pad like the original Razr, there will likely be a screen that covers the top and bottom halves of the phone and that can even fold closed. Another plus going for the Razr foldable phone is that it will be comparably less expensive than its $2,000 premium counterparts. For more info, read about CNET’s roundup of other foldable phones available now.

Motorola hasn’t formally launched the Razr foldable phone yet, and Motorola has not officially commented on the Razr’s folding design, price or availability. The company has repeatedly said that its policy is to “neither confirm nor deny rumors” about products.

But even as they keep mum about it, the Razr remains one of the most anticipated phones coming down the pipeline. Despite being released 15 years ago, the Razr still has name and brand recognition. Its clout is as much of a draw as its folding display will likely be.

Here’s everything we know at this point.

As mentioned earlier, Motorola was reported in January to be reviving its Razr brand with a new device, according to The Wall Street Journal. Later, a patent filing discovered by tech blog site 91Mobiles included illustrations of what could be a new Razr phone.

The illustrations suggest a similar design to the original, but instead of the interior surface being divided by a hinge that separated the display and dial pad, the allegedly new Razr would be entirely display. The screen would apparently be flexible enough to fold in half and the curved bulge of the screen (when closed) would be hidden inside the phone’s body.

If these markups turn out to be accurate, Motorola is taking a more practical approach than Samsung and Huawei. Instead of a phone opening out into a tablet, the Razr’s appealingly small size would mean it remains a pocketable phone. Small phone fans rejoice!

It was speculated that the company might announce the phone in April, but when the month came along, we instead just got more purported press this time in the form of images posted to the site /Leaks. The photos show a phone with a Motorola logo and a long, continuous display. Another image shows the phone folded at 90 degrees.

The same January story from The Wall Street Journal also reported that the phone will allegedly cost $1,500. That’s more expensive than most high-end smartphones like the iPhone XS Max or Galaxy Note 10 Plus.

However, with the Galaxy Fold and Huawei Mate X costing $1,980 and $2,600, respectively, the Moto Razr’s supposed price seems reasonable for a folding phone. This along with leaked specs could be a hint that the Razr is more of a midrange foldable phone instead of a premium one like the Fold and Mate X.

Another report by Let’s Go Digital points to the phone costing €1,500.

In March, the tech enthusiast site XDA Developers shared what were alleged specs and features for the Razr:

As a reminder, the display on the original Razr was just 2.2 inches. A new 6.2-inch display bodes well for people who prefer as much screen as possible packaged within a small body. The processor is a curious choice, too. Instead of a Snapdragon 855, Motorola may go with the Snapdragon 710, which is found on the mid-tier Galaxy A8 and Xiaomi Mi 8 SE. It will be interesting to see how Motorola optimizes features for the processor.

Razr may be packed with useful software features

One of the features leaked by XDA Developers was the Razr’s ability to use the main display as a trackpad when unfolded. This is similar to the One Button Nav found on some of Motorola phones like the Moto G5 Plus, which used the fingerprint reader as a mini trackpad instead of the screen itself.

Like the original Razr, there might be a display on the outer shell. This could offer more functionality especially with some of Motorola’s apps like Moto Display, Moto Camera and Moto Actions. Currently, Motorola uses a lightly skinned version of Android on its phones that include similar shortcuts. I really enjoy the company’s take on Android and I hope if a Razr phone materializes that it uses something similar.

Rumors also posit that Google Assistant will be a big part of the device and that there will be a specific feature to trigger it when the phone’s closed. This is especially probably important since folding phones like flip phones back in the day do require a different way to control and interact with them. Being able to access the phone when closed with just your voice could go a long way toward solving some UI issues.

Huawei is about to release an iPad Pro… errr MatePad Pro!