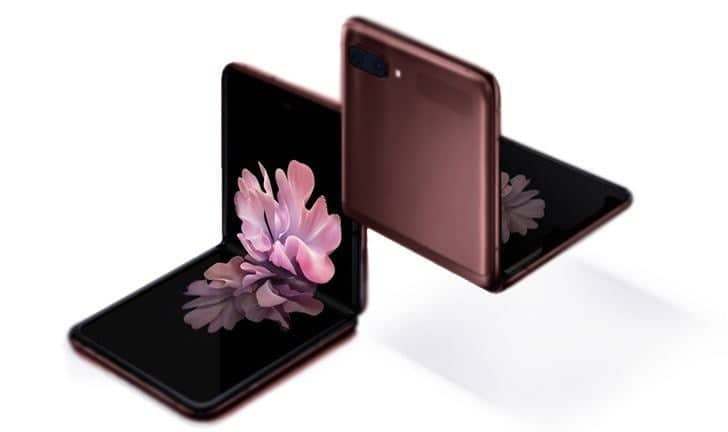 Samsung’s 5G-enabled Galaxy Z Flip variant has never been much of a question mark, following in the footsteps of a 4G LTE-only model released back in February with an identical design and very similar specifications in tow. For a fairly long time, we assumed the spec sheet would prove to be virtually unchanged aside from the connectivity section, but a pre-launch benchmark revealed a significant processor upgrade a couple of weeks ago.
Just in case that made you hopeful of a change in appearance as well, yesterday’s Tenaa certification and today’s 360-degree “evleak” should eliminate all doubt. On the outside, the Galaxy Z Flip 5G is essentially indistinguishable from its forerunner, with the same exact centered hole punch in tow, razor-thin screen bezels, dual rear-facing cameras, and tiny cover display.

As rumored a little while ago, the color options will be different this time around, including an absolutely gorgeous Mystic Bronze hue rendered from all angles by Evan Blass. This matches the first Galaxy Note 20 Ultra paint job leaked yesterday and one of several Galaxy Watch 3 colors pictured of late, which is certainly a nice and somewhat unexpected touch.
The original Galaxy Z Flip, mind you, was made available in Mirror Black, Mirror Purple, and Mirror Gold flavors, none of which matched a Galaxy S20 series or Galaxy Watch Active 2 shade perfectly. This basically proves Samsung is taking its foldable smartphones more seriously rather than treating them as quirky experiments unlikely to break into the mainstream anytime soon.
Of course, that’s not to say the Galaxy Z Flip 5G will be very accessible to the masses. After all, the first edition is still priced at a rather prohibitive $1,380 unlocked, and with the addition of 5G support (for three of America’s big four carriers) and an overclocked Snapdragon 865 processor replacing the Snapdragon 855+ SoC, the upgraded device is pretty much guaranteed to cost at least $1,500 or so.
Unlike the Galaxy Watch 3, the Z Flip 5G is widely expected to break cover alongside the Galaxy Note 20, Note 20 Ultra, and Galaxy Fold 2 at a virtual Unpacked event on August 5, although actual sales may not kick off very soon thereafter or keep up with demand for long.