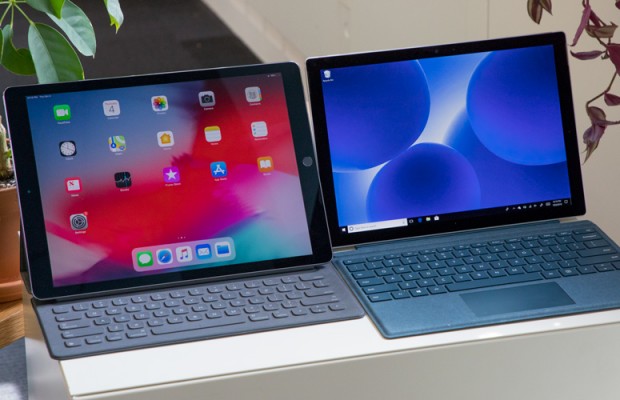 If you’re looking for a tablet that can double as a laptop, the two best options are the iPad Pro and freshly-announced Surface Pro X.  Both these devices sport super-slim bezels, support for a pen, as well as a keyboard accessory that you may need for typing.

The Surface Pro X is the newer of the two devices, though you might be wondering how it stands up to the latest iPad Pro. In this guide, we’ll compare design, performance, and portability, and help you choose the right one for you.

In terms of design, both iPad Pro and Surface Pro X are super slim and pack a large immersive display. However, there are some notable differences. First off, the bezels on the iPad Pro are much slimmer all the way around on the top, left, right, and bottom sides of the device. The bezels on the Surface Pro X have been cut down on the sides, but the top and bottom borders still remain a bit chunky.

The iPad Pro is insanely sleek, full of interesting features, and undoubtedly the most powerful tablet ever made.

The Pro X also has slightly more pixels per inch than the iPad, but the iPad Pro sports a brighter 600 nit 120Hz True Tone display, which we found makes scrolling smoother and more responsive. The Surface Pro X is slightly behind with a dimmer 450 nit 60Hz panel, common for most Windows devices.

Importantly, the Surface Pro X benefits from the built-in kickstand, which makes the device easier to use on your lap or on a desk.

Next, there is a need to address connectivity, which is also different between the two tablets. On the iPad Pro, there is a single USB-C port, as well as a keyboard connector port and a nano SIM Slot. The Surface Pro X, meanwhile, doubles that up. It features two USB-C ports, nano SIM, as well as Microsoft’s proprietary Surface Connect port for charging. You’ll also find the connector for the keyboard on the bottom.

Finally, both 2-in-1’s sport an option for a keyboard cover. Apple’s Smart Keyboard comes in at the cost of $170. It’s fairly comfortable and has a lot of key travel, as we found in our review. However, there’s no touchpad on board. That holds it back from being a true laptop replacement. It also doubles as a stand, propping up the screen to up to two angles.

The Surface Pro X, meanwhile, sports an optional $140 Type Cover. In terms of comfort, we found essentially the same as what we experienced with the Surface Pro 6, but it now also houses a special spot in the top for the Surface Pen — which we will discuss later. However, note the Pro X does not support older Microsoft Type Covers, as the connector is different.

iPadOS has come pretty far toward offering a better software solution for multitasking and productivity, but the full version of Windows 10 offered on the Surface Pro X will be more familiar for most people. The iPad Pro wins the tablet comparison, but the Surface Pro X is the better laptop replacement.

In terms of performance, there’s quite a bit difference between the iPad Pro and the Surface Pro X. Unlike previous Intel-based devices, Microsoft partnered with Qualcomm to create an ARM-based Microsoft SoC, dubbed the SQ1 processor. The iPad Pro, meanwhile, sports a custom ARM-based Apple SoC, named the Apple A12 bionic.

The SQ1 runs at 3GHz, sports eight cores, and two teraflops of graphics power. Microsoft says this SoC features three times more performance per watt than the Surface Pro 6’s Intel 8th-gen chip. However, there are some limitations to take note of, as some areas of Windows 10 and 64-bit apps aren’t optimized for ARM-based chipsets. More testing is needed, but it should still be great for web browsing, and other day to day activities. Other apps like Photoshop might not work quite as well.

Now onto the iPad Pro. It sports the A12 Bionic processor. This has eight cores and also an embedded M12 co-processor. We found this processor quite powerful for editing in Photoshop and Lightroom, as well as for gaming in Civilization VI. No matter what you download from the app store, the iPad Pro will run it at breakneck speeds.

Quite obviously, the iPad Pro is limited to apps in the App Store, as it is powered by iPadOS. The Pro X meanwhile runs full Windows 10 and is compatible with Google Chrome and other traditional Windows programs, though there will be limits to 32-bit apps, as we mentioned before.

Now, for battery life. With the iPad Pro, Apple promises up to 10 hours of battery life, though we were able to push our iPad Pro through several days with a few hours usage at a time. The iPad Pro also supports fast charging, with the optional 30-watt USB-C Power Adapter.

Next, Microsoft promises up to 13 hours of battery life on the Surface Pro X with the screen at 150 nits of brightness. We need to test it more, but judging the fact that the Pro X is an always-connected PC — which we’ve seen get up to 13 hours of battery — we’re assuming that this is indeed true. It also supports fast charging, via the Surface Connect port. Microsoft especially claims that this can get you to an 80% charge in just one hour.

We’ll also mention the support for LTE on the devices. All models of the Surface Pro X have a nano-SIM tray. That means that you get LTE with any configuration, whereas with the iPad Pro, you need to pay $150 extra if you want a model with LTE.

Finally, there is the pen. Microsoft’s new Surface Slim Pen with the Surface Pro X slots right into the Type Cover keyboard and recharges wirelessly. This makes it easy for portability, but it’s also a separate $145 purchase. That’s significantly more than the $129 Apple Pencil, which also charges wirelessly and can attach to the top of the iPad Pro.

For now, the iPad Pro is the winner

The Surface Pro X doesn’t launch until November 5, so right now, the iPad Pro is your only real option. But beyond that, most people will be happier with Apple’s offering. Configured with 64GB of storage and LTE support (that is the default on the Surface Pro X,) it starts at $1,149. The price then comes up to $1,448 when factoring in the keyboard and Apple Pencil cost.

With the Surface Pro X, you’ll be paying $999 for just the device, when configured with 8GB of RAM and 128GB of storage. That is then pushed up to $1,285 with the keyboard and pen. Sure, it is cheaper than buying an LTE connected iPad Pro, and you get much more storage space, but there is a lot that is currently unknown about the device.

We need to test the Surface Pro X some more to see the true performance of the SQ1 chipset, as well as match the battery life claims.  iPad Pro is the way to go right now, but that could change when we get more time with the Surface Pro X.

Introducing Pixelbook Go, a Chromebook laptop for people on a budget